ConfettiGate: 10,000 surplus Huselius bobbleheads may be next to rain from BAC rafters

Share All sharing options for: ConfettiGate: 10,000 surplus Huselius bobbleheads may be next to rain from BAC rafters 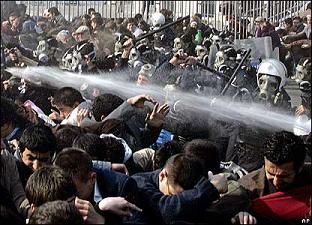 Now that countless piles of confetti - employed Sunday evening in celebration of, well, something - have been swept from the lower bowl of the BankAtlantic Center, word on the street is the Panthers organization then showered fans with freebie t-shirts. A fine gift if one is a history buff: the shirts were from Opening Night. Of 2007.

Why not re-insert into the local stream of consciousness a relic from an evening which saw the Cats slip only one goal (long live Cory Murphy) past New Jersey backup Kevin Weekes?

Ok, enough with the sarcasm. For now.

The confetti issue is one thing: Cats prez Michael Yormark described it in his thinly-veiled concert promotion page blog as being "geared toward thanking our fans for the loyalty, dedication and support they showed us all season long." That's cool; South Florida is indeed a unique hockey market with distinct demands. Things are done a bit differently here. No news there.

But the fan-love celebratory atmosphere should have been announced before the game to the players first, so as to make no mistake what the point of all the hoopla really was about. As in "We are going to promote a happy, pumped-up Thank You Fans blast after the game, which has nothing to do with our club scowling in the standings dumpster. So don't take offense when shredded season ticket holder applications wind up in your jocks." Perhaps a large "Thanks, suckers!" banner should have been unfurled from the TyrannoVision at the same time. Easy enough, and no confusion.

Onto the t-shirts: I get the general idea, but did it have to be such low-grade surplus crap? How that initial proposal - essentially disposing of three-year old unwanted corporate giveaway junk little further up the evolutionary ladder from personalized pencils and golf balls - didn't smack of a ridiculous lack of class is beyond most fans' realm of rational thought. Has the front office ever considered the concept of thinking something through?

A question: why weren't those shirts donated to disaster relief?