Share All sharing options for: Jokinen returns to Sunrise as Panthers host Rangers 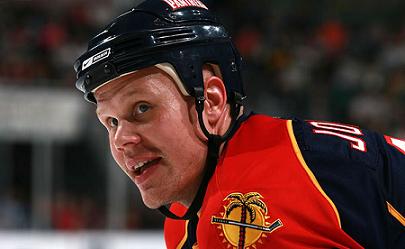 Perhaps lost in all the recent - and understandable - lottery hoopla has been the pending return of former Florida captain Olli Jokinen.

Since his trade deadline deal from Calgary to New York, Jokinen has amassed 13 points (3 goals) in twenty games while primarily centering the Rangers' first line.

The longtime Cat served as team captain from 2003 through 2008 until a draft day deal in June of his final season in Sunrise, sending him to Phoenix in exchange for Keith Ballard, Nick Boynton, and a second-round pick. His 91 points in 2006-07 remain the high-water mark of an eleven year career. Unimpressive stints with the Coyotes and later Calgary - two clubs with their own unique issues - did little to improve his status around the league.

Olli took considerable heat for the Panthers' (annual) collapse in mid-February of 2008 - coinciding with the infamous injury to teammate Richard Zednik of which he was an unwilling, accidental partner - leading to Florida's demise in the standings and another playoffless April. Thirteen points (5 goals) in 24 games and a perceived lack of interest to close the year fueled speculation of a rift between he and then-coach/GM Jacques Martin. Serving as the supposed "final nail", his early departure from a charity golf tournament with Nathan Horton led to accusations that the captain was tainting and leading astray a young superstar-in-training.

Off-ice, the guy was nothing less than a pro and superior spokesman for the club (other than one particular charity golf outing). On-ice was a different animal, in that he'd been losing here for so long that an attitude of indifference could hardly be faulted, if there was any truth to it at all. Can't say he didn't show up most nights: 419 points (188 goals) in 567 Florida games prove otherwise.

The Zednik deal - in my eyes - sealed Jokinen's fate with the organization. He lacked any zest or excitement to play the game, at least in those final weeks in Sunrise. "Well, he's being paid $5M balloons, so he'd better get in gear" doesn't travel too far on the heels of the worst in-game catastrophe since Clint Malarchuk in the late eighties (or  Ronnie Francis for John Cullen in the early nineties, but I digress).

This isn't a Bouwmeester-type of arrangement; dood certainly had earned the lovingly open arms he received upon his return to Sunrise in February.

So the Cap'n slips into town with eyes on a playoff spot, but no idea what to expect from his former home crowd:

"It could be anything between cheering and booing, I guess. I really enjoyed my time when I was playing for the Panthers. There’s a good group of fans over there, hard-core fans. I know a lot of them, actually, being there so long."

Rangers at Panthers Live Game Forum powers up around 6pm.