"Best goaltender in college hockey"; Cheverie signs with Panthers. What next in net for Cats?

Share All sharing options for: "Best goaltender in college hockey"; Cheverie signs with Panthers. What next in net for Cats? 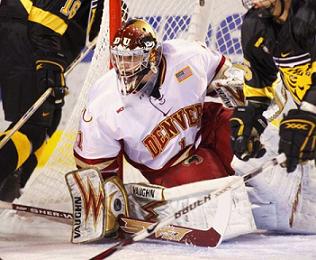 Hobey Baker Award finalist. WCHA Player of the Year. Two distinctions fans haven't seen bundles of in Sunrise over recent years. Now it is reality. And for all the excitement that comes with it, Florida's goaltending picture becomes increasingly clouded.

University of Denver netminder Marc Cheverie (24-6-3, 2.08, .932) signed a two-year deal with the Panthers this week, allowing for the 23-year old to forgo his senior year at DU and join the Florida organization.

How does this translate for the Cats, near-term? First, Rochester is going to get a terrific goalie for 2010-11 in either Cheverie or uber-prospect Jacob Markstrom, who will be in the fold at that time as well. What this may mean for current Amerks tenders Tyler Plante (an RFA in July) and Alexander Salak (signed through next season) has yet to be determined (and pending RFA Chris Beckford-Tseu will likely be the first to fall) but a hot contest for limited spots surely awaits, considering the epic decision Cats' GM Randy Sexton has ahead of him as the NHL Draft and UFA Day close in: What to do with goaltending cornerstone Tomas Vokoun.

As is common knowledge 'round these parts, "T-Vo" has one year remaining on his current deal at $6.3M ($5.7M cap hit) which soaks up a large portion of available cash. Granted he's been more or less the club's only true "rock" over the past three seasons, but dealing him at the draft would free up a princely sum, a healthy portion of which would likely be utilized on whatever assets could be gained in return. And keep in mind, a number of current players are going to be due raises as they approach RFA status this summer, primary among them Jason Garrison, suddenly-hot Nick Tarnasky, and Mike Duco (we'll discuss the collective future of Gregory Campbell and Kamil Kreps at another post).

Back to the key point: the Panthers are generally - and theoretically - set in goal for the time being. Have we officially reached the stage where Scott Clemmensen (two years remaining) is given the crystal key? Here's the hypothetical: Vokoun is dealt for whatever, Clemmer gets the starting job to be backed up by Markstrom, while Cheverie and Salak/Plante handle duties in Rochester. The aim here is having Markstrom (who has no North American pro experience) groomed for the Number One job within two years, with Cheverie sliding into the backup role.

We're not even mentioning way-out prospects Brian Foster or Sergei Gayduchenko, of course. Their judgement days will come over time.