Share All sharing options for: Panthers in 2010 IIHF World Championship: gold, silver, and bronze for Cats 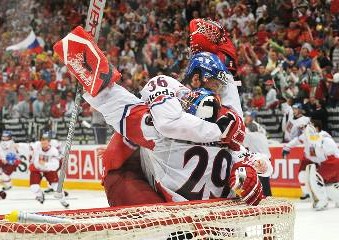 The 2010 edition of the WC closed up shop after a wildly unpredictable tournament (Americans placing 13th anyone? How about Canada 7th?), but at the end of the day three current and future Panthers took home some shiny new hardware.

Gold / Silver Medal Game - CZE 2, RUS 1:  With Russia's Semyon Varlamov pulled for the extra attacker late in the third frame, Tomas Vokoun surrendered his only goal of the game (to Pavel Datsyuk), ultimately stopping 35 shots to seal the win - and the tourney - for the Czech Republic. T-Vo now has dual-golds and a bronze in four WC appearances. Dmitry Kulikov logged 15:35 TOI with no points or shots, but should have some sweet stories to tell having been around a second Alex Ovechkin (0 points, -2) club to come up short of reasonable expectations in two weeks' time.

Among the three Panthers involved in Sunday's action, only one is iron-clad guaranteed a spot in Sunrise to start the 2010-11 season. Take a guess which.

More goodness at IIHF.com and of course our own Puck Worlds.