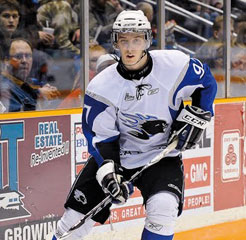 With their last two first round picks, number three pick Cam Fowler and 2009 pick Dmitry Kulikov, having been defensemen, the team needs to again turn to later rounds to stock up on forwards. Fortunately for the Panthers, former GM Randy Sexton traded his two best free agent signings, defensemen Jordan Leopold and Dennis Seidenberg, into second round picks, giving the team a good chance at picking up at least one bona fide top-six NHL forward.

Much like last year's draft, the Panthers have a present dropped in their lap in the form of a young talented Russian playing in the QMJHL who should already have been picked. Galiev, who should have gone late in the first, is a steal for the offensively challenged club. Even though not as big a steal as picking up Kulikov fourteenth overall last year, Galiev is an impressive player who will be ready to make the jump to the NHL before most of the players who will be picked around him, especially for a club like the Panthers who will need offensive talent sooner rather than later.

Galiev was close to a point-per-game player in Quebec and has been compared to Pavel Datsyuk. He led all rookies in scoring, was a finalist for the QMJHL Rookie of the Year award and was named to the All-Rookie Team. He won a championship in Indiana and fell just short with Saint John's. He has pursued his dream of playing in the NHL by leaving Russia for Indiana to play in the USHL, and has already extracted himself from his KHL contract with Dynamo Moscow and so is available to be signed right away.

The Panthers are in need of players who are offensively talented, but also good defensively and play with a team mentality as well as motivated players will be ready in the next couple of seasons. Stanislav Galiev fits that bill perfectly.