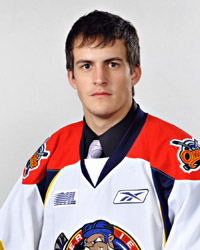 Having taken two solid prospects early, the Panthers take a risk here, passing up the bumper crop of defensemen to pick the best prospect Florida youth hockey has produced to date. While he would likely last into the next round, the Panthers have no third round picks this draft and so are taking a second-round chance on a local player. Along with the on-ice issues, the Panthers have PR problems as well. One of the least talked about aspects of the so-called "southern expansion" of the NHL is the long-term affect on the game. Having teams, particularly NHL teams, in non-traditional markets is a huge boost to youth and club hockey. Besides building the next generation of Panther fans, the team's efforts in promoting youth hockey in South Florida are building the next generation of hockey fans and now, professional players. Drafting a local player who is also a bona fide NHL prospect is a huge PR coup for a team with an often poor image.

As for Yogan, he is close to a point-per-game player in the OHL who still needs to work on his defense. He will fit in with too many of the current Panthers in that respect. He played in the Top Prospects game, in which he had 5 penalty minutes for Team Cherry, earned in a fight with defenseman Matt Mackenzie. He's been praised for his physicality and puck-handling ability, both of which the Panthers need. He could turn into a good second or third-line center for Florida in a few years and additionally will be beyond excited to pull on a Panthers sweater.