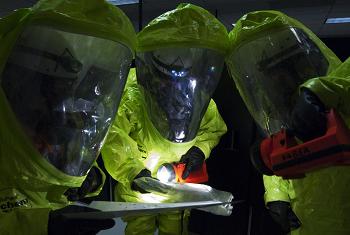 Word is spreading quickly regarding a recent ESPN story covering the tasty topic of sports arenas around the U.S./Canada and the cleanliness - or specifically lack thereof - among their internal food and beverage vendors. It's a must read from top to bottom, if only for the bureaucratic language employed. "Excreta", anyone?

More after the jump, including a rebuttal of sorts from the BAC's concessionaire...

Such a compilation can strike fear into the collective - and formerly hungry - sports fan's heart in rapid fashion, but don't get too worked up; many of the buildings profiled were cited for such innocuous doings as "several locations lacked adequate hand-washing equipment", "one location was cited for having sanitizing solution that was too weak", "food was not being held at a proper temperature at at least seven locations", and "inspectors found roaches below a soda dispenser at one location". Well, maybe strike that last one.

Among domestic NHL clubs, the BankAtlantic Center did relatively well (and best of all the major facilities in Florida...yet one more mountain that Stevie Y will have conquered with typical elan by Friday):

"Soiled"? I'll take "soiled" over "Inspectors had a vendor dump a bottle of Chivas Regal whiskey containing dead fruit flies" any day of the week. Interesting no rats were found...

Curious as to how the rest of the Southeast Division fared? Behold (and fingers are crossed that ESPN's legal department isn't mounting a detachment to West Palm forcing yours truly to ease up on the cut-and-paste antics):

Who isn't guilty of that? Big deal.

When this is your mascot, should anyone be surprised?

"One location with five critical violations"? Love to see how the presumably superior vendors finished.

As a Panthers fan, you've just got to feel a little better about last season after reading that.

"Centerplate takes the topic of food safety and the well-being of our fans seriously, and works with the local health department to actively manage safe food service operations," Centerplate senior vice president of marketing Bob Pascal said in a statement. "Employees are trained and operations are routinely inspected to ensure that they meet standards for safe operation. Any deficiencies that are identified during the course of an inspection are immediately corrected, usually in the presence of the inspector."

So there ya go.