Share All sharing options for: Panthers lines for tonight's Preseason Game vs Bruins

Here's the line combination's straight from the board for the Florida Panthers in their game against the Boston Bruins tonight.  Tuukka Rask will be starting in net for the Bruins.

After the morning skate David Booth said that he's excited to play again and in a building where he started his professional career.  While smiling he said, "I just need to keep my head up."

(more after the jump) 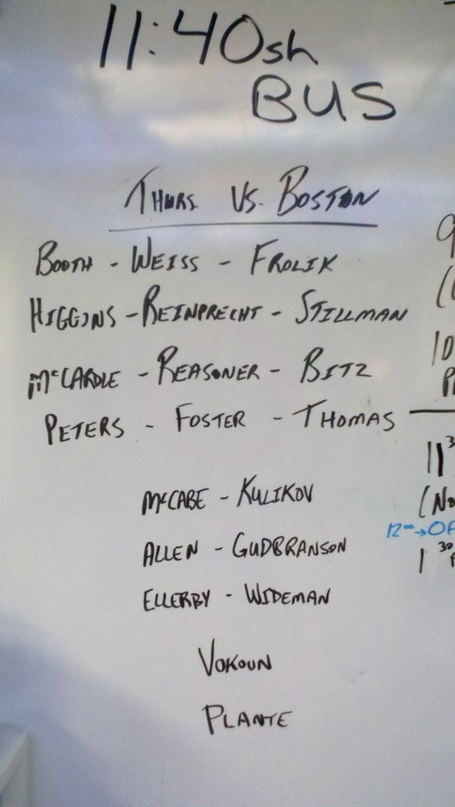 Andrew Peters knows his role and said that he does not plan his fights but is always ready to fight if needed.  He's determined to prove that he's a great 4th line player and is going to do everything he can to not be sent down to the Amerks.

When asked about Keaton Ellerby, Pete DeBoer said that Ellerby put on 20 pounds of muscle over the summer and he needs to be more assertive.  He's not going to be leading the power play but he needs to be someone who can lead with the puck down the ice.  Ellerby picked #4 for his jersey, which was the same number Jay Bouwmeester wore.  Ellerby had been compared to Bouwmeester but that's not why he picked 4, he said that's always been his favorite number and was excited when he found out it was available.