From the NHL Guardian Project we present: The Panther

Share All sharing options for: From the NHL Guardian Project we present: The Panther 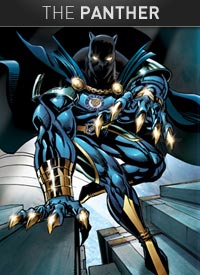 So here it is: Florida's representative to the NHL Guardian Project. From the official release:

The Panther is all South Beach fun and youthful exuberance. What would you expect from a character that routinely drinks from the fountain of youth? The other Guardians are constantly on him to take things a little more seriously, but to no avail. He's the one used to spending his days hanging out at the beach and nights hitting up the hottest clubs in the world.

The Panther is half man/half panther and is one of only two Guardians with feline powers. He has night vision, he has super agility and powerful legs and arms that allow him to jump incredible distances. He has razor sharp gold tipped claws that can slash through 6-inch thick metal walls. The natural ability of a panther to be able to blend into his surroundings making him almost invisible is the inspiration for one of the most unique Guardian talents.

We'll have more on this very soon, since traits such as "South Beach fun" and "other Guardians being on him to take things more seriously" (a Horton error, obviously) simply demand commentary from our end, but what's your initial take?