Share All sharing options for: Could 2010-11 Panthers win a seven-game series?

Making the playoffs is always a hot topic in South Florida, and as the calendar soon turns to February the Cats are on the prowl for a playoff berth. For a fanbase that hasn't seen its team make the Stanley Cup playoffs in ten consecutive seasons, every win seems to inspire a naive glimmer of hope - maybe this is the year the Panthers finally shake the hex. However, as Florida GM Dale Tallon has repeatedly exclaimed, getting into the postseason isn't the goal, it's winning the Cup. So while the Panthers sit 8 points out of eighth place with 3 games in hand, and remain in mathematical playoff contention heading into February the question begs asking: if they made the jump, could this roster win a seven-game series, let alone a 4 round marathon?

This is a Panthers squad that has struggled to string together consecutive wins on a consistent basis but the bottom line is, in a seven-game series they only have to win four before the other team. Have they shown an ability to do that? At the 49-game mark, the Panthers have played seven 7-game "blocks". Obviously in a playoff round you compete against the same team, and a series can be swept in four games while not requiring the full potential duration, but for argument's sake this is a breakdown of the first seven "mock-playoff" series the Panthers have played thus far: 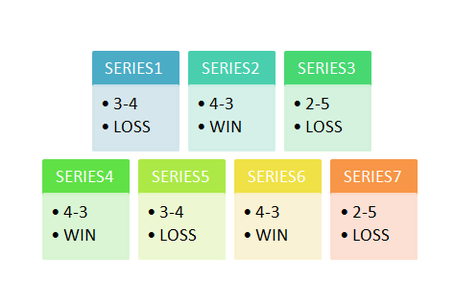 Surprisingly, despite not being able to string together a significant winning streak, the club as currently constituted would have won 3 of their 7 "mock-playoff" matches. So the team does have the ability to win a series at least by this logic; all that remains to be seen is whether they can muscle into the postseason - and then capture lightning in a bottle.