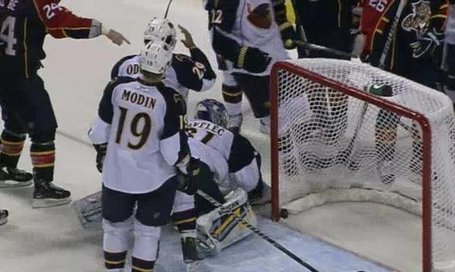 Photo courtesy of A. Slater via VanMurph.

UPDATED (and my own bad for not including the Horcoff controversy from October 10th as well):

For the third time in less than half of a season schedule, the NHL and its officials morphed the rules for a brief moment to favor Florida's opponent. And please: can the "whining about officiating" crap before it begins...


This was Big News less than three months ago, leading to international attention and admissions from the highest levels of the league - a day later - that "no goal" should have been called and a penalty was due to Orr for goaltender interference. Oops, sorry! Getcha next time! Leafs win 3-1; two potential points in the sewer. But we're all past that, right?

Fast forward to Wednesday: Atlanta up 3-2 on Sunrise ice. Bryan McCabe with the inside point shot. This was considered an Ondrej Pavelec "highlight save" on NHL.com (shortened, to brush off controversy) but check out the 10-second mark of the video below - the only one yet available online as I type this - when Pavelec looks to scoop the dead puck out of the net:

Every player on that ice surface knows the puck legally crossed the goal line. Both benches knew it. McCabe knew it. Pavelec unquestionably knew it. Game officials, continuing a bizarre pattern when dealing with Florida, somehow did not. Adding insult to a very real standings injury, the league refused review.

Now, it's been a long day on my end - and no doubt for coach Peter DeBoer as well - but I'll go firmly out on that proverbial limb by saying this is simply more of the same utter and complete BS we've come to expect. From officials, and especially the NHL; how could there be no review of a play gift-wrapped for such attention? They review everything. And it's not like the War Room was busy; only one other game was underway.

This is one of those situations where we semi-understandably expect the naysayers to descend on our quaint, sleepy market with chants of "Detroit never blames the officials"; well, the Wings/Pens/Flyers/etc don't get their goaltenders "legally" bowled down a la Orr, nor have to accept games decided well in advance of the final buzzer by confusingly waved-off goals that would be counted by the Federal League. There are two sets of rules in the NHL, period.

Spend the majority of an entire lifespan rooting for / propping up / preaching the gospel of a club - in my case the Panthers and Whalers - and the league consistently defacates down your throat.

Don't misunderstand: no anger whatsoever is directed toward the Thrashers or Pavelec, who were playing to the situation. We'll certainly hear from them - as well as the NHL - in a day or so when the Earth has cooled and they can slip a quick "it was kinda on the edge, but likely was a goal, an unfortunate judgment" past the few media outlets who may care. This is a non-Capitals Southeast Division matter, after all. Tree falling and no one's around to hear it...

Bottom line: Florida lost a goal tonight, in a tight divisional match at home. And this absolutely shameless league - drunk on the windfall of outdoor games and manufactured Crosby/Ovechkin Mania - didn't wish to be bothered. A day in the life.

UPDATE:  Not a great view, but a different one...is Pavelec pulling a McRib out of the cage?

UPDATE:  OFP features NHL rep Mike Murphy's response, which rings rather familiar to a few of us:

"...this play would have been a very difficult play to award a goal on because we never know when the puck goes in the net relative to the referee blowing his whistle. But we still should have reviewed the play. That was my error.''