In front of a sellout crowd of 18,352 fans, the brand new Florida Panthers didn't disappoint. After a 'back-to-reality' loss to the Pittsburgh Penguins on Tuesday, a win was needed to reignite the fire in a Panthers club expected to make waves at home. No problem for Jose Theodore. It took 65 minutes of hockey plus 3 rounds in the shootout to squeak past the Lightning, but in the end two points is two points and the Panthers advance to 2-1-0 on the season. Although the Cats may have caught Tampa Bay in a tough position after two debilitating losses, give them credit; under no circumstances should Florida beat the Eastern Conference finalist Tampa Bay. And given last year's roster, this game wouldn't have been a win. Yet three new additions came together to defy the odds and lead the team to victory.

You want a statement win to build chemistry? This game was the exact definition of one. Even though beating the Lightning hasn't been difficult over the years for whatever reason, the Panthers had to work hard for the win. The defense had to be(and was) stellar holding the Lightning to just 30 shots through 65 while keeping Steven Stamkos and Vincent Lecavalier off the scoresheet. Jose Theodore had to stand on his head through regulation and kept Tampa's big three scoreless in the shootout. The entire team kept mistakes to a minimum and smothered most of Tampa's scoring chances. Tonight was a great win for team morale a chemistry building.

More after the jump.

After the pregame ceremonies for the start of South Florida hockey(finally!), the Panthers started out in stark contrast to how they started against Pittsburgh. Although Tampa Bay is comparable with Pittsburgh, you could tell immediately Kevin Dineen had been working his team to measure up better with the difficult opponent. 3 minutes in Ryan Carter earned himself another dumb penalty (3rd in 3 games) for roughing up a Lightning player, giving Tampa an opportunity to start the period on top. This wasn't to be as the Panthers stayed perfect 9-for-9 on the penalty kill. At this point, you could sense some momentum shifting to the Panthers favor, and when Mattias Ritola took an elbowing penalty the Cats needed a goal. Again, it wasn't meant to be as this time Tampa kept their 100% PK streak alive, but it wouldn't last for long. Dominic Moore would crash into Jose Theodore a few minutes later, and Ed Jovanovski would score his first Panthers goal in 12 years on the resulting powerplay, assists to Tomas Kopecky and David Booth. The Panthers would enjoy a total of 4 powerplays in the first period and numerous odd-man rushes, but Jovo's goal would be the only score after 20. Panthers 1, Lightning 0

The Panthers would start out shorthanded on the carry-over from a late Jovanovski penalty from the first period, and with that penalty killed, Florida would be the last team to be perfect on the penalty kill (the Devils allowed a PPG to the Predators earlier). Both teams would exchange chances throughout the early part of the period but neither could make much noise. Given the defensive issues the Lightning have had in the last few games, this was exactly what Guy Boucher wanted; a stay-at-home, defensive period. After Jack Skille was up-ended by Marc-Andre Bergeron, Steve Downie and Erik Gudbranson dropped the gloves for some good-old face smacking. Though I never saw the fight, Randy Moller and Sid Rosenberg were impressed with Gudbranson for holding his own against a tough opponent in Downie. Both players would receive 2 minutes for unsportsmanlike conduct, 5 for fighting and a 10 minute game misconduct (edit: Gudbranson would also receive an instigator penalty). Two minutes later Moore would take his second penalty for tripping but despite Stephen Weiss's huge chance off the pad of Mathieu Garon, the Cats simply couldn't convert. At the end of the second, the Panthers were dominating shots 29-16, but a lowly 1-for-6 on the powerplay left them hanging on to a precarious 1-0 lead.

The third period started the way the other two had; slowly. In fact, that's the story of the entire game--defensive play and great goaltending. But after continuing this style of play for 10 minutes into the third, something had to give, and it sure did. Bergeron would send a shot past a screened Jose Theodore to even up the score at 1 (assist to Moore). The Panthers would come alive after the goal with a few rapid-fire sequences on Garon to no avail, at that point Garon had turned away 32 of 33 and was hungry for a win. 6 minutes later, the game would be tied yet again, this time the score being 2-2 thanks to Kris Versteeg on the powerplay (from Dmitry Kulikov and Brian Campbell) and Bergeron yet again (from Pavel Kubina and Martin St. Louis). That would be the extent of the scoring in the third as each team would receive a point heading into overtime. Panthers 2, Lightning 2

Fast forward another 5 minutes to the shootout where the Panthers would ice Versteeg, Marcel Goc and Tomas Fleischmann. Tampa would ice St. Louis, Stamkos and Lecavalier. Versteeg's shot would be saved by Garon, St. Louis' shot was stopped by Theodore. Goc slipped the puck under Garon as he attempted a poke check, resulting in a goal for Florida. Stamkos would be stopped on his backhand attempt, Flash missed the net and Vinny was kept out by Theodore. Boom, Cats win. Panthers 3, Lightning 2

Observations: Pardon my lack of specifics, but I wasn't able to find a feed to watch the game and see the players, so general observations will have to do. 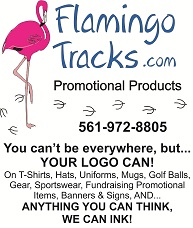 Also, another resounding thank you to Flamingo Tracks Promotional Products for all the help making the Litter Box Cats opening night suite a success for all. These guys are your go-to source for any and all of your promotional needs.