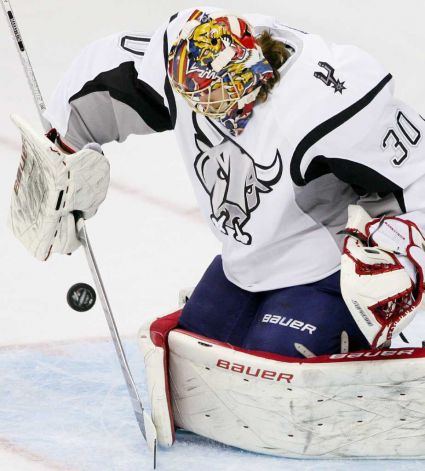 The Panthers are playing coy on an apparent "short term" injury to goaltender Scott Clemmensen; in his stead the club has recalled Jacob Markstrom from the Rampage, co-author of a 28-save overtime victory in Grand Rapids less than a day ago.

Starter Jose Theodore has banked a wee bit more rest after having surrendered - with a lot of help - three goals on Thursday to the surging St. Louis Blues. Despite allowing a quartet of goals on 29 shots vs Pittsburgh on October 11th (Florida's second game of the season), his 19-5-1-2 lifetime record against the Pens should be enough to get him the nod in net once more. But I'm certainly not dumb enough to wager on it...