Hello, everyone. My name is Corey Sznajder and I run the Carolina Hurricanes blog, Shutdown Line. One thing I've been doing over there is monitoring how our coaches have been using the players over the course of the year. To do this, I've been using "OZ "Coke" Charts," which have been circulating all over the hockey blogosphere this season. What these charts do is provide a simple, easy-to-use graph that shows which situations players are being used in.

To do this we, take a player's offensive zone start percentage (x-axis) and plot it against a player's corsi relative to quality of competition (y-axis). A player that's getting less offensive zone starts and is put against tough competition is likely in that role because the coach trusts him for his defense. So, if we have a player that's in the top left part of the graph, it means that he's been receiving the toughest assignments on the team. It's a little complex at first but once they are put into context, things make a lot more sense. For more information on this, check out Robert Vollman's feature on OZ "Coke" Charts at Hockey Prospectus.

Like I mentioned earlier, I've been monitoring this for the Hurricanes all season but I also like to see how other coaches utilize their forwards and decided to make graphs for every team in the Southeast and after the jump, we'll take a look at how Kevin Dineen's been using his forwards and defensemen this year.

I did make a couple changes with my graphs so we can see how a player is performing relative to his assignments. A player is represented by a bubble and if the bubble is blue, that means he has a positive corsi relative rating (which shows how he is performing territorially compared to the rest of the team). If it is red, then he has a negative corsi relative and the bubble increases in size depending on how big or a positive or negative corsi he has. For instance, if a player has a big blue bubble, then it means he's killing it possession-wise. If it's a big red bubble, he's likely struggling to create offense.

Hopefully that made sense. Anyway, here's what the OZ "Coke" Graph for the Panthers forwards look like: 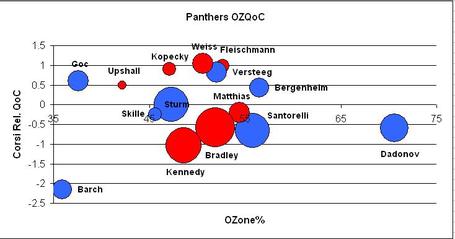 I wouldn't pay too much attention to Krys Barch's bubble as he's only been on the team for a few days. Moving on, Marcel Goc and Scottie Upshall were getting the bulk of tough assignments before they got hurt and Goc was one of the best forwards on the team in terms of possession. He started less than 40% of his shifts in the offensive zone and still had a positive corsi rating, which speaks a lot about his defensive ability. His line taking the tough draws has also freed up Florida's first line to easier minutes.

Stephen Weiss, Tomas Fleischmann and Kris Versteeg are playing against tough competition but they're getting more of their draws in the offensive zone (or at least they were earlier in the year) and that has been part of the reason for this line's success. Having Goc back in the lineup is going to make things even better for them. That said, Versteeg appears to be the one driving the play on this line as both Flash and Weiss are negative in corsi relative. I know these three have been getting the benefit of some luck at even strength but it looks like Versteeg's producing might stick around for awhile even if his shooting percentage regresses (it's at 19% right now).

One thing that sticks out to me is how the team is using Sean Bergenheim in a more offensive role instead of using him on a shut down line like Guy Boucher did in Tampa Bay. He was one of the best possession drivers on the Lightning and would be a perfect fit on Goc's line but it appears that Dineen wants to utilize his offensive skills more according to this. Conversely, he's using Tomas Kopecky, a player that's been sheltered in terms of zone starts for most of his career, in a much tougher role. He's performed respectfully compared to others but it is strange to see Dineen use Kopecky and Bergenheim in different roles compared to what they've done over their career.

Jack Skille and Marco Sturm are playing softer minutes compared to the rest of the team but they aren't getting any help with zone starts. Despite that, they've been able to create a good amount of offense with their shifts.

Evgeni Dadonov, Mike Santorelli, Matt Bradley, Tim Kennedy and Shawn Matthias are the guys that are getting sheltered minutes and the only ones who are making the most of it appear to be Dadonov and Santorelli. Bradley's missed some time so his data is probably skewed a bit. Considering the tougher minutes that Weiss and Goc are playing, sheltered minutes could help out Santorelli a lot. He's not scoring much but he's getting the puck in the opponent's zone a lot.

Next we'll look at the defense: 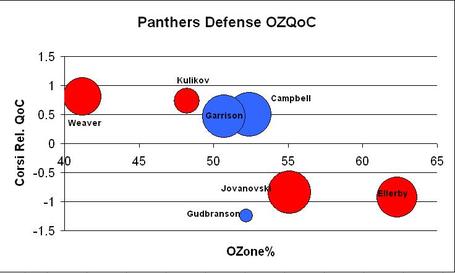 There's been a few changes with Florida's defense corps and the biggest thing was the acquisition of Brian Campbell. He has been a beast at driving possession this season and moving Jason Garrison into a more offensive role helped too. He's also having a terrific season. The negative effect this has is that Florida broke up their shutdown pair of Garrison and Mike Weaver, who were extremely effective and underrated last year. With Garrison in a more offensive role, that's left Weaver to do most of the heavy-lifting and he's struggled a lot. His partner, Dimitry Kulikov, has also been struggling at preventing shots but he's playing slightly better than Weaver according to this.

Among the players who are sheltered, rookie Erik Gudbranson is the only one who is keeping his head above water. Both Ed Jovanovski and Keaton Ellerby have been getting easy ice-time and are failing to dictate the pace of play. Those numbers aren't good at all but lucky for the Panthers, Garrison and Campbell have been playing at a really high level and carrying this defense.

So there you have it. Any thoughts, disagreements or suggestions for these charts at all? It's still a work in progress but they are a convenient tool for judging how a player handles his role.