How long before some selfish rat spoils it?

Share All sharing options for: How long before some selfish rat spoils it? 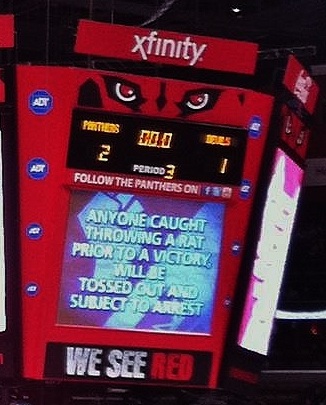 When objects [read: plastic, rubber, live, deceased or otherwise] are thrown on the ice during a stoppage in play, including after the scoring of a goal, the Referee shall have announced over the public address system that any further occurrences will result in a bench minor penalty being assessed to the home team.

Ok, that being said, the wording is a bit fuzzy, as in he'll have it announced that a penalty will be forthcoming after a "further occurrence", whatever that means (after next whistle?). Then again, fuzzy or not: would you volunteer to be the penalty-causing guinea pig in a one-goal game?

We're all thrilled beyond words that the rats have returned - due primarily to a very few who kept the fire burning through some awfully desolate seasons. This unique practice is ingrained in the region, and scores of non-hockey locals continue responding to an off-the-cuff query about the Panthers with one of two words: "Vanbiesbrouck" or "rats". So cool, that.

But it wouldn't take much to ruin the goodwill. Was an easy gig in 1995-96, when a mass-launch of the wee-beasties was a regular occurrence and more importantly, legal within the NHL's rulebook. Not so today, wherein one plastic toy impacts ice prior to the final whistle and it's curtains for the Cats, in the shape of a two-minute minor.

Can only hope folks jumping aboard the bandwagon (and there remains plenty of room) have enough sense to realize the consequence to the team involved when making the decision to toss a rat at the wrong moment.

Anyone else miss the good ol' days?