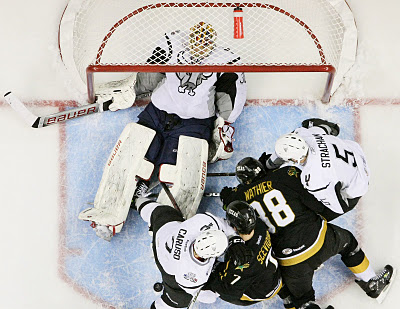 "Jacob Markstrom wowed fans with back-to-back stellar performances with wins over Charlotte and Texas after being the tough-luck loser in 1-0 games in Oklahoma City and Houston. Overall, he has a 95 percent save percentage and stopped 90 of 94 shots in the two weekend wins. Should the saving Swede continue his excellent efforts during the upcoming stretch, the Rampage will be tough to beat. The key to the Rampage success could be a thousand miles away — keeping Jose Theodore and Scott Clemmensen healthy, keeping Markstrom [with San Antonio] to ply his trade."

- MySA's Tony Uminski; more on the recent success of the Rampage here.