With only a few exceptions, top teams generally have one thing in common: They get consistently strong outings from their goalies. In fact, the starters on the Eastern Conference’s top four teams all boast better save percentages than Vokoun. Tim Thomas has a .936 save percentage in Boston; Henrik Lundqvist has a .932 percentage in New York; Florida’s Jose Theodore has a .924 percentage; and Pittsburgh’s Marc-Andre Fleury is at .923.

Beyond the obvious, another nation's capital city will be vying for our attention

@FlaPanthers: Coming to the #FlaPanthers game [Monday]? Come early and head to the Panther Bar pre-game to be in a @FSPanthers commercial! 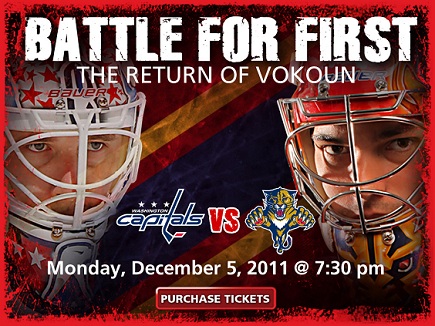 ...in which category is this "Battle For First" being waged? First in what? On-time arrivals? Can't be referring to the Southeast, obviously, since try as they might there is nothing either club can do to change things at the top of the division, at least on this night. Earned, that privilege was.