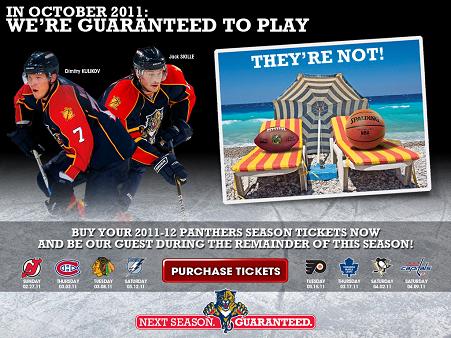 Tough one last night; if there are any positives to be had from the 4-3 Red Wings victory it's that Florida hung in and kept it a game, when on paper this shouldn't have been a contest whatsoever. More from Winging It In Motown on what likely shouldn't have been so nearly a close match here. Ah, Todd Bertuzzi: the Keenan Gift which keeps on giving.

Tonight features a prime Southeast pairing, as the Cats travel to Tampa Bay - the Wings' last victim before Friday - for some rebranded Lightning action. Our Game Preview hits at 3, while Live Game Thread ridiculousness fires up at 6ish...with a twist: some of you regulars may recall "road trips", wherein we hook up with a fellow SBN Hockey community and "share" periods (no, I don't like the way that came out either). In essence, we'll publish our own Game Thread here, head over to the lovely and talented Raw Charge for the first and third frames, while hosting the second at LBC. Sounds confusing but it's loads of fun; come on out and hang with us while we school our cross-state brethren on proper urinal advertising etiquette. Elsewhere...