Share All sharing options for: Panthers' Dale Tallon at the NHL Trade Deadline: a brief history

During his tenure as general manager of the Chicago Blackhawks, current Florida Panthers boss Dale Tallon soldiered through four seperate NHL trading deadlines between 2005 and 2009.

Often when assessing possible future outcomes it's useful to glance back and see what moves architects of the past performed in order to gauge which direction they may travel. As Tallon noted when arriving in Sunrise almost a year ago, there were several similarities between the situations in Chicago and Florida, perhaps culminating in a similar trade strategy on February 28th. The following is a compilation of all of Dale's player transactions in and around (within a month's period) the NHL Trade Deadline. 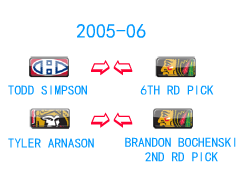 Notes: In his first Trade Deadline with the Blackhawks, Tallon made only 2 trades and both of them saw him dealing away rostered players for a brighter future. Tyler Arnason was perhaps the biggest shocker, as before the trade he had 41 points in 60 games which was third best on the squad, and one season removed from being the Hawks top scorer. Neither of the draft picks have been converted at the NHL level. 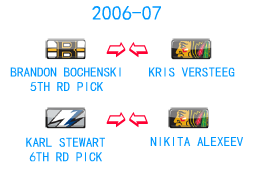 Notes: The second Trade Deadline for Tallon really crossed the gambit-- in his first deal with the Bruins, Dale traded away then-highly sought-after prospect Brandon Bochenski (whom he had traded for only a year earlier) for the young Kris Versteeg which would eventually pay big dividends for the club and should be considered Dale's best deadline deal ever. On the flipside, the Tampa Bay deal seemed to be rather moot for both sides, and the only active piece, Johan Harju, the player the Bolts selected with their 6th round pick has only had a cup of coffee with the big club this season.

Notes: The Carolina swap could be looked at as one of the two losses Dale has ever made at the deadline--and even then this one wasn't mammoth considering what it ended up bring in; a piece of the cup. Andrew Ladd, who has now lived up to his first round billing with the Atlanta Thrashers, never quite established himself with the Hawks and while he was part of the Cup winning team, he was considered more of a complement to their centerpieces. Ruutu has been an integral part of the Hurricanes roster, ranking 3rd this year in Canes' scoring, good for a place in the top 50 amongst the entire NHL. The 6th round pick in return for Lapointe, Brandon Birch has yet to really spark up the depth charts.

Notes: James Wisniewski has slowly become a dominant force in the NHL, but he was never going to get the minutes on the Blackhawks roster, especially down the stretch. Pahlsson would end up being huge in that years playoff run providing solid 2-way play but would only play the stretch run and playoffs. The other cogs in the deal Stephenson and Kontiola were likely afterthoughts, and while Stephenson still could make the jump as a defensive D-man, he sits unsigned while Kontiola now plays in Europe. The 4th round draft pick would become Byron Froese, who is having a decent season with the Red Deer Rebels, sitting 22nd in WHL scoring.

It will be fascinating to see what Tallon does in and around the NHL Trade Deadline in his 5th go-round. It is a much different situation given all of the contract statuses of his veteran core, but don't be surprised if there isn't a fire sale and Dale only pulls the trigger on one or two deals...after all, there is precedence for this approach.