Panthers at Thrashers: A tale of two "non-traditional" hockey cities

Share All sharing options for: Panthers at Thrashers: A tale of two "non-traditional" hockey cities

Atlanta and Florida. At face value, there aren't a lot of differences between the two beguiled Southeast Division rivals: they're both in what's typically labeled as non-traditional hockey markets, they're struggling with the economic side of the game (including gate, finances, arena expenditures, roster salary), they're finding a difficulty in generating a solid fanbase in a heavily-saturated sports market, and they're right in the thick of things for this year's NHL playoff race - but their blueprints for success couldn't be more different. 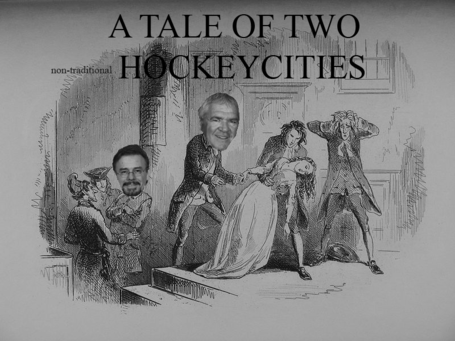 In the calm before the storm that is the annual NHL Trade Deadline, the Florida Panthers sit 12th in the East, 9 points out of a playoff spot. The glimmer of hope seen in early February seems to have subsided with the most recent string of losses and then there is the unthinkable; ten consecutive years without a postseason appearance seems more and more likely. Panthers management seems to be waving the white flag no matter what mathematical chances may still be in play:  "This is a long-term project. There’s 10 years of mismanagement that we’re trying to turn around, hopefully in 3-4 years. If it means risking a playoff spot this year, we’re going to do it." says Florida assistant GM Mike Santos.

Up the road in Atlanta, former Cats general manager Rick Dudley is facing a similar playoff dilemma with his Thrashers club, who've amassed a mere six wins over the last 26 games while falling to five points back of the Hurricanes for the last playoff spot in the East. They're currently on the outside looking in, but unlike the Panthers, Craig Ramsay's boys aren't expecting massive turnover, dictating an urgent approach to the 2010-11 season. Conversely, throw in endless relocation rumours (declining attendance ranking 27th in the league) and ownership issues, and the future may be now or never for the Thrashers.

Two very contrasting strategies in building a winner tailored for a non-traditional market now sit parallel to one another, but undoubtedly one will move ahead. Which is the right way to build a winning franchise: Florida's rebuild or Atlanta's push for contention? Two heavyweight - and effective - building philosophies are set to do battle as the tale of two "non-traditional" hockey cities is ready to be told.

Traditional hockey knowledge would dictate that the plan set out by Dale Tallon and staff is the defacto choice, the road most taken by future contenders, having been the strategy followed by the Chicagos, Washingtons and Pittsburghs of the world who have all waded through depths of despair for years to become the goliaths and perennial contenders we now know. They built their teams slowly and with care, largely benefiting from lottery picks earned through their hardship - but there's one very big difference with the Floridas and Atlantas of the world: they don't have the luxury of being in an established hockey market with deeply entrenched fans patient enough to see a rebuild through its paces, and perhaps that is why Florida has seen its share of rebuilds taking course over the past ten seasons. Begging the question, can traditional hockey wisdom actually work in a non-traditional market?

For Dudley and company, this situation requires a different solution. Dudley, hired this off-season from Chicago, came to Atlanta ready to make bold move after bold move. His summer gameplan saw the lowly Thrashers going out and actively pursuing pieces, immediately overhauling the roster by obtaining four former Blackhawks in  Dustin Byfuglien, current Thrashers captain and leading scorer Andrew Ladd, Ben Eager, and the now departed Brent Sopel. While criticized early, these moves had an immediate impact on the Thrashers roster.  Early success was there as the Thrashers gained leaguewide attention on the ice, but despite genius local marketing ploys and an unprecedented outreach to the community, attendance lagged. If winning doesn't put people in the seats, is the team even viable in this marketplace? This is a question Thrashers ownership is currently dealing with and Panthers ownership is watching closely.

Florida GM Dale Tallon also made offseason moves, and no one can deny that they too were bold, but the cost for Tallon was perhaps higher (having given up previously perceived "key pieces" in Nathan Horton and Keith Ballard) while the overall impact on the 2010-11 roster was marginal; Tallon largely concentrated on the draft and the prospect-acquisition business to which many believe the GM shined.

Despite the focus for an immediate overhaul and desire to make the Thrashers relevant, Dudley did not throw away the future like past Thrashers managers - in fact he drafted 9 players in seven rounds, including rostered player Alexander Burmistrov, and besides the departure of Jeremy Morin, the ATL prospect pool was left relatively untouched. The Thrashers urgency was balanced out with an understanding foresight into the future. Dudley was showing that it was possible at least early on to turn the fortunes of a team around in the blink of an eye in very reasonable fashion.

The Thrashers must have been watching the Eastern conference finals last season, when two very unlikely underdogs in Montreal and Philadelphia rose from the dust of battle and proved that all a club really must do in this league full of parity is make it to the dance. But one would be remiss not to point out that the inevitable Cup Winner, Dale's one-year removed Chicago Blackhawks were built from the ground up and rose to supremacy as one of the Western Conference's Big Contenders only after a complete rebuild, something the Panthers are trying to replicate.

The wild card factor in this debate has to be Dudley and his aforementioned experience at the helm of non-traditional market-based hockey teams. He spent two seasons with the Cats, serving as GM between 2002 and 2004 (and before that held the same position with the Lightning from '99 to '02). He obviously understands the economic landscape of this type of market and might have a slight edge; we've seen that in his rapid shift from wide eyed architect looking to build through the draft in Florida with the likes of Jay Bouwmeester to what he'd eventually craft in Tampa by bringing in stars like Martin St. Louis, Nikolai Khabibulin (who Tallon acquired in Chicago), Dan Boyle and Dave Andreychuk, and setting the table for the eventual 2004 Stanley Cup Champions. He certainly has the upperhand in that respect, but to be fair the lay of the land has changed considerably-- this is a new NHL after all and perhaps that's where Tallon has an edge.

The big problem with both of these unique blueprints, is that so much has to go right and it all has to do with the game on the ice, and the fans-- for the Thrashers a large portion of their plan relies heavily on hockey operations, they feel bringing playoff hockey and a bit of a run to the Philips Arena  will sustain a winning environment to which they can build off of, where as the Panthers plan depends on patience from the fans to ensure that the rebuild is met to the end-- this particular issue has plagued the Panthers organization for years and been the downfall of many General Managers as they've cut the chord much too early If these plans fail, a lot more than just a losing record becomes at stake.

With talks of relocation forever a hot-button issue around the league, and economic stability of the southern clubs always in question, can teams such as Florida or Atlanta actually afford to wait 3-4 seasons to become relevant? Can they endure losses for that amount of time and still remain in place? Obviously, Panthers parent corporation SSE has displayed a bit more unwavering faith to the plan in Florida than the fractured Thrashers ownership has brought forth, but who's to say that another year or so down the line of consecutive losing seasons wouldn't propogate cander about the revival of the Nordiques?

Heck, with the way the Nordiques built their team with prospects and an awesome talent pool just before leaving for Colorado - who would then win the Stanley Cup in their inaugural season - are the spoils of the Nordiques' hardships almost foreshadowing the Cats' situation? Conversely, some might discern what Dudley is doing in Atlanta is a huge risk, but so to is the "tradtional approach" by Tallon.

Both organizations are taking gambles with not only their hockey but business futures and existence; at this point it's very unclear who's making the right move, and as such their blueprints will be heavily debated for years to come. What is clear is that both Tallon and Dudley seem to genuinley want to be the first GM's in their clubs' history to bring home the Cup and change the culture of their hockey regions from potential deathbeds to hockey hotbeds.