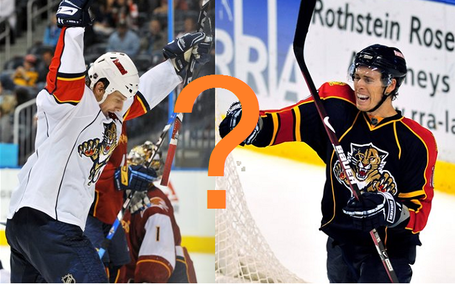 Whenever numbers 9 or 10 take to the ice, excitement is instilled. Stephen Weiss and David Booth are two of the most notable players on the Florida Panthers roster, and arguably the two biggest guns the Cats have on offense (Weiss sits 1st in points with 40, while Booth is tied for 1st in goals with 17). So why is it, that in the prime of their careers - and on a team starved for goals - that legitimate news sources from TSN to ESPN are speaking about the probability that Weiss and Booth are both in play this trade deadline? Could Sunday's 2-1 loss against the New Jersey Devils be the last time we see either player in a Panthers uniform? Will that small bit of excitement be lost? Is it possible that the last two pieces of the "Sunrise Express" will ride out quietly into the sunset tomorrow? Here's why Booth and Weiss might have played their last game as Panthers.

It's hard to imagine two high-end skilled players - who wish to stay in Florida - not being part of GM Dale Tallon's "blueprint". However, if the plan as Assistant GM Mike Santos said is to turn around the team in 3-4 years, it's not completely inconceivable to think that Booth and Weiss just don't fit into the long term plans-- after all, in 4 years time Booth will be 30 and Weiss 31; in the "New NHL", young kids rule. By the time this team begins to turn a corner in accordance to the plan, these two coveted players will be entering the decline of their careers, and while it's not out of the norm to see 30 year olds (or 43 year olds, hello Boston's Mark Recchi) playing key roles (7 of the top 30 NHL scorers are over 30) it's just not that likely. So if Tallon were to get the most out either of these players in progressing the plan, he'd need to sell them at their absolute highest point in their careers. For many experts, that point is now.

By dealing away Booth and or Weiss on Monday, Tallon and Santos would be fast-tracking the rebuild considerably (from the return, to salary dumping to just opening up roster spots).  While this move would undoubtedly have fans in a remarkable frenzy it's a move that has to be heavily considered if this rebuild is to be any different then the half-baked "rebuilds" of the past; to be truly good, you have to be truly bad. Earlier this week Tallon spoke to NHL.com , stating "It's a lot easier to turn a franchise around in a hurry when you're picking lottery picks than when you're picking 14th." He added "Having said that, you can't take the fire and edge out of a group that, to me, has given its all every night. We've had 30 one-goal games. If we would have had a little bit of luck here and there we'd be in a different position, but that's just the way it is. Obviously when you know you're selling it's easier to get involved and get it done quicker." It's a sad reality for this organization, but dumping high end, big salary players is a trend that will likely be continued if Tallon is serious about his rebuild.

Both players have relativley affordable long term deals that make them more than just rentals which in today's cap-driven scope makes both players attractive buys, and considering they are in the prime of their careers and have been in the upper echelon of NHL production for a few years now, it's no surprise that Weiss and Booth are hot commodities for a number of teams.

When looking at Tallon's track record, it's apparent that The Architect is willing to make big, controversial moves to strip apart the team he has inherited. During his first deadline appearance in Chicago, Tallon shipped off Tyler Arnason, a young promising forward who in his previous season led the Hawks in scoring. The gamble proved correct. Only time will tell if Tallon will consider moving the faces of his franchise but don't be surprised if it does happen... and if it does, the pitchforks and torches will be at the ready.