When 2011 began, the Florida Panthers had the National Hockey League's worst powerplay. Fast forward to February and not much has changed in terms of rank but the Panthers are quietly improving on the man advantage; in fact the stats show a 2% jump in under a month as the Cats improved their 9.3% conversion rate on the powerplay to 11.3%. While this might seem inconsequential, those 2 percentage points represent a 18.6% conversion rate during the month of January (8/43) which when compared against the entire season, the Panthers would have a 13th-ranked powerplay. Don't look now, but the Panthers have quietly manufactured a viable man-advantage.

At the beginning of January, the individual pieces of Florida's powerplay were assessed by looking at "Powerplay Effectivness"; one month later these same pieces will be plugged into the PPE formula to understand how and why the Panthers are performing much better on the man-advantage.

Powerplay effectiveness is found through this simple mathematical formula:  ((60/t)p)/30

Where t is PPTOI and p is Team PPGF. This figure will give you the effectiveness of a player on a full 2 minute powerplay. The higher the number, the more effective the player.

Here are the figures for the Florida Panthers who have played more than 30 minutes of powerplay time as of February 1st: 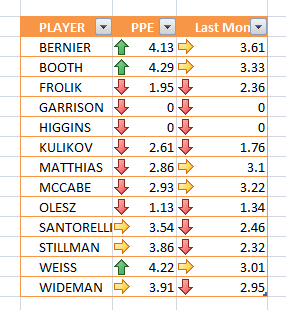 So what does this all mean? Statistically speaking Booth, Weiss, and Bernier have been forces on the powerplay in January. When they are on the ice, the Panthers have a better chance of scoring a powerplay goal. While none are putting up totals like that of PP titan Steven Stamkos (7.65), they are proving to be far more effective than castoff Nathan Horton (3.54) who plays a rather pivotal role on the Boston Bruins' 16th-ranked powerplay - meaning the "big guns" on the Panthers squad are earning their keep.

Despite a subpar PPE, defenseman Dmitry Kulikov took a gigantic step forward over the past month, improving his play considerably. While the points haven't yet materialized on the PP, he is showing vast improvement while nearing that "3 point" range which would place him in the company of quality young powerplay defensemen like Cody Franson (3.23) but it still puts him far off from some of the elite like Alexander Edler (8.09) and Duncan Keith (8.11). Keep in mind for the month of January Kulikov had a PPE of 5.14 which puts him ahead when compared to All-star youngster, Erik Karlsson of the Senators who has an overall PPE of 4.8.  It's important that Kulikov and Wideman both continue to improve their play and remain effective, especially with Bryan McCabe - last season's mainstay on the Florida PP - nursing an injury.

The Big Impact Player: forward Cory Stillman made the biggest waves this past month improving his PPE by a considerable margin. This positive change is beginning to show not only in team PPGF but on the scoresheet as Stiller collected 3 powerplay assists. He's proving that when he's on, the Panthers are a dramatically improved team, and it is no coincidence that upon returning to the lineup on the last day of December that the Cats powerplay has been improved (over 2% gain), a number that while is influenced by merely 1 goal over a months span, has huge ramifications on in terms of league perception and relevance.