It must be springtime because I'm back on the road, following around the Florida Panthers like the foolish South Floridian hockey fan that I am.  This year we're going to be on the road for six days, seeing four Panthers games and one Rochester Americans game.  The awesomeness began today when I was up bright and early for a 9am flight out of Ft. Lauderdale headed to New York.

In my experience, you cant come to visit NYC without taking a walk around the city and getting some kind of food that is almost always better in New York (pizza, gyros, etc.).  It worked out perfectly for me today because we arrived a few hours before the hotel had a room available, so there was plenty of time to spare.

Another thing I usually do up here is stop by the NHL store and count how many Florida Panthers items I can find.  The previous record had been 2, a jersey and a hat, but today that mark was blown out of the water.  After a little searching I found a hat, jerseys (home and alternate), two different style t-shirts, a novelty golf putter and a coffee mug.  To be honest, I feel like this has been one of the more depressing seasons in recent Cats history, but apparently the NHL thinks it's a good time to sell Panthers stuff.  Go figure, right...

After a nice relaxing late afternoon, which was needed after all that walking, it was time to head to The Garden.  It was nice that the Cats were not only starting Tomas Vokoun (though Clemmer was injured), but Jack Skille and Shawn Matthias were back as well.  I was also excited for the game because I thought there would be some kind of excitement in the arena, maybe even a ‘playoff atmosphere' since the Rangers are still battling to ensure their spot in the postseason.  Boy was I wrong.

The mood in the area was so ‘ho hum' it was almost depressing.  I've been to MSG several times and have an idea of what its usually like in there as far as loudness goes, and this was far from the norm.  It was almost like the fans were just assuming the win because it was the Panthers that were in town.  They finally began making some noise in the 3rd period, but I think that was more anxiousness then anything else because they realized it was getting late and the game was still tied.  Not to worry Rangers fans, you got your late game-winner.

Something I usually do when on the road is look around the arena for other Panthers fans, and tonight I didn't spot a single one.  The closest thing I found to a Cats fan was a guy walking around during the 1st intermission wearing a Miami Heat hoodie.  Another thing I couldn't help but notice was that we, the fans, weren't being bombarded with ads when there was no hockey going on.  I honestly can't tell you about any events coming up at The Garden, or who sponsors their power play, or their puck shuffle game.  That was a very pleasant change, I must say.

The one personal positive that came from this game was that I have Henrik Lundqvist on my fantasy team, so the shutout loss wasn't a total failure.  Now its time to get some sleep before waking up nice and early to head to Chicago for the 2nd game of the back-to-back set.  Funnily enough, I have Blackhawks goalie Corey Crawford on my fantasy team as well.  The weather forecast for the morning keeps changing, but hopefully the possible rain/snow doesn't affect our outbound flight.  I'll catch up with you all tomorrow from the Windy City.  Thanks for reading, and Lets Go Panthers! 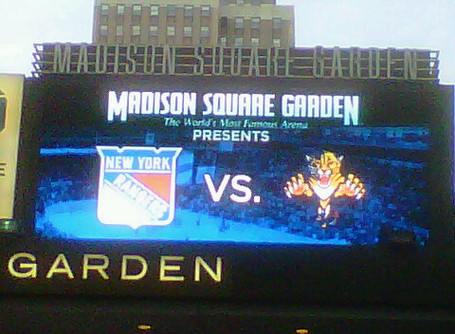 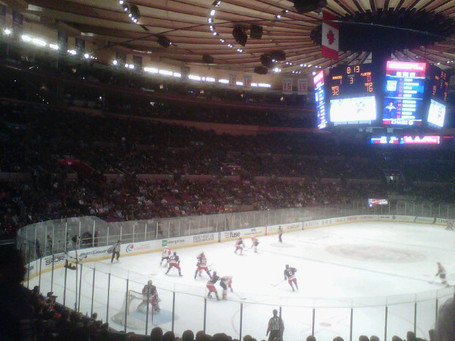