Panthers Road Trip 2011, Game 2: Starting to get pretty cold outside

Share All sharing options for: Panthers Road Trip 2011, Game 2: Starting to get pretty cold outside 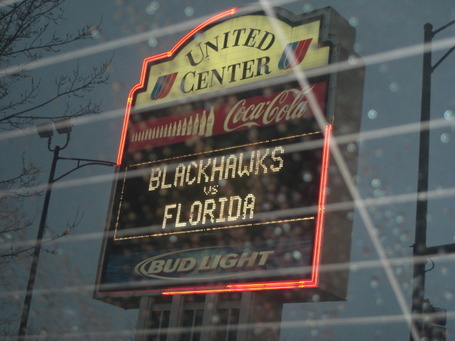 Greetings fellow Panthers fans...this time coming to you from the very chilly and unfortunately windy city of Chicago.  I've done back-to-back road games before, but today was the first time I had to jump on a plane to get from point-A to point-B.  Thanks to the lovely springtime weather making its way through the Northeast, I got to sit on a plane for 2 hours before it moved a single inch.  Thankfully, I remembered to charge my iPod.

My arrival to Chicago was pretty similar to my arrival to New York; dropped off bags at the hotel and walked around looking for a place to eat.  The only difference was the temperature, which was a good 10 degrees colder and steadily dropping.  When it was time to jump in a cab and head to the United Center, there was a sort of rain-ish snow-ish precipitation falling.

We got to the arena a little early, about 30 minutes before the game, and were pretty surprised to see how crowded it was.  It had been a while since I arrived to a game that early (I've got a very easy trip to the Bank Atlantic Center so I can usually leave my house by 7:10 and be in my seat when the puck drops) so we went down to the glass next to the Panthers bench and watched warmups.  It was nice to get a look at Tyler Plante, and judging by what I saw the kid has a very good foundation and could be a solid goaltender in this league if given the opportunity.

Looking around, I'd say that about 85% of the fans were wearing Blackhawks jerseys of current players.  I quickly noticed a Florida jersey, and upon further review saw that it was a #15 Skille sweater.  We found out that the kid wearing it had a connection to the former Blackhawk and was quite upset when they shipped him down to Sunrise.  Something to feel good about was the praises that some of the ‘Hawks fans were singing about Dale Tallon.  They were quite optimistic about the Panthers future, so there is something for us to smile about.

Sitting in our seats as the players came onto the ice, there was barely an empty seat in the house.  It was packed.  Then came one of the coolest things ive seen at any game I've ever been to.  They started playing the National Anthem and the place went bonkers.  Everyone was standing and cheering, clapping and singing, and the farther we got in the song, the louder it got.  Seriously...one of the most exciting and amazing things I've been a part of at a sporting event.

The game itself was alright.  The Panthers looked like their usual lackadaisical selves, getting outshot and not really generating any offense.  For the second straight night Tomas Vokoun stood on his head, but got little support.  From what I read online after the game, he seemed to be even more pissed then he was after the Rangers game on Tuesday, and I can't say that I blame him.  A combination of the lack of help from his teammates and the last couple goals that went in would've had me fuming as well.

So with two games in the books, I've yet to see the Cats score a goal on this trip.  As I said yesterday, the personal positive for me is that both games were played against my fantasy team goalies.  That isn't good for the road trip because I've also got Marc-Andre Fleury on the roster, so lets hope we rack up the goals on Friday in Buffalo.  As for the trip, tomorrow is a day of culture as the plan is to do a little museum tour and then find a bar to watch some NCAA tournament action.  I'll catch up with you all on Friday night after the Sabres game.  Unlike the Rangers game last night, I remembered to bring my camera to the Blackhawks game tonight, so I'm adding some pics from the game.

One final note...I have send out a thanks to my friend and season-seat neighbor Jose, known around these parts as Snoop97Dawg.  Thanks to him, I got a little airtime on tonight's Panthers broadcast right before the beginning of the 2nd period.  If you want to see the video, you can check his twitter @Jose97Luis or mine @DavidDwork for the link.  Again, thanks for reading and Lets Go Panthers! 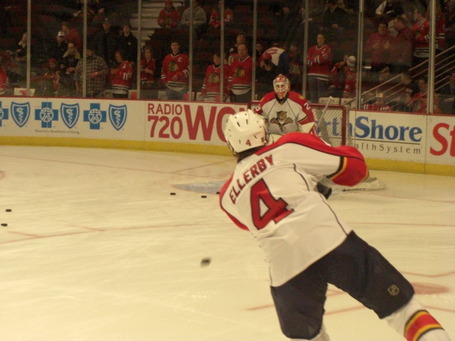 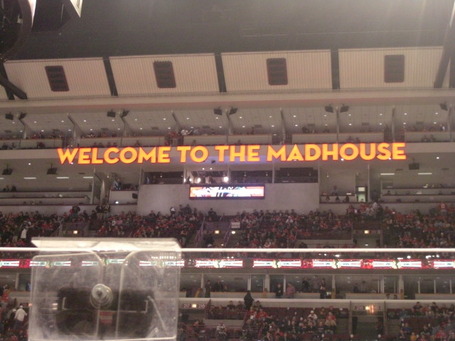 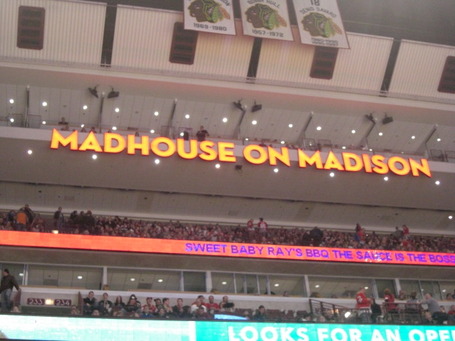 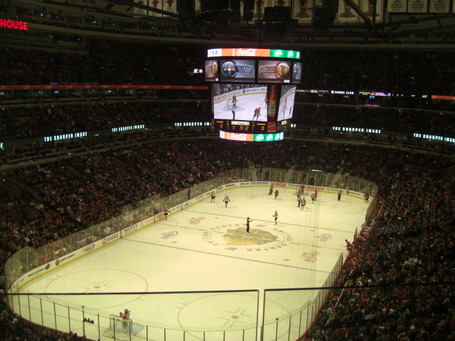 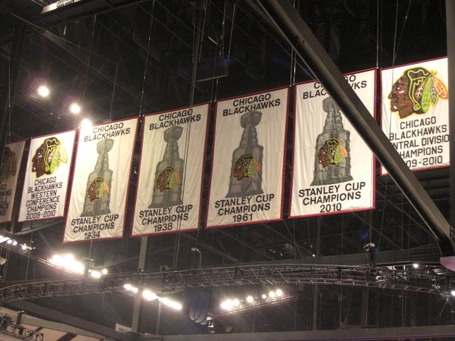 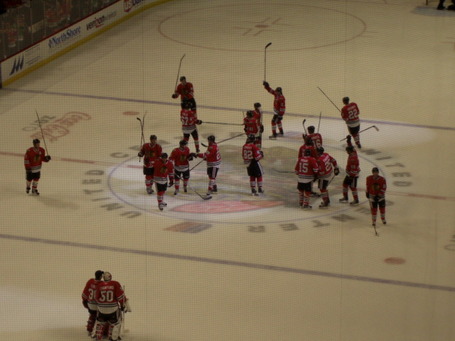