The unthinkable happened in February: the lowly Cats powerplay climbed out of the depths of despair, moving from worst to second-worst in the league on the man advantage...it's progress. To begin the month, the powerplay had a conversion rate of 11.3%. Now, a little bit more than four weeks later that same figure sits at 13.4%, a growth rate of 2.2 points, which as we learned last month that, while seemingly inconsequential, those points represent extreme growth and admirable success. In fact, in February, the Panthers had 44 powerplays and scored on 9 of them which is a 20.4% success rate. It might not seem that great, but prorate that number and compare it to the current totals from around the NHL and that would tie the Panthers for 6th place with the Tampa Bay Lightning. This is an astronomical turnaround when considering early on Florida fans were wondering if it was possible to negate the man advantage altogether.

At the beginning of January, the individual pieces of Florida's powerplay were assessed by looking at "Powerplay Effectivness"; Since then, these same pieces have been plugged into the PPE formula each month to understand how and why the Panthers are performing much better on the man advantage.

Powerplay Effectiveness is found through this simple mathematical formula:  ((60/t)p)/30

In essence, t is PPTOI and p is Team PPGF. This figure will give you the effectiveness of a player on a full 2 minute powerplay. The higher the number, the more effective the player.

Here are the figures for the Florida Panthers who have played more than 60 minutes of powerplay time as of March 4th: 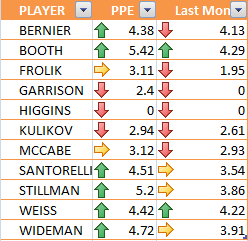 So what does it mean? It's been no secret that the Panthers powerplay has been playing a lot better as of late, but when closely examining the improvement of the individuals on ice during the man advantage, it's a bit shocking.

David Booth leads all Panthers with a PPEof 5.42, a 1.13 improvement from the previous month of play - while a perfect Powerplay player would have a PPE of 24, the fact that Booth is nearing the 25% range puts him in very great company, among the likes of Steven Stamkos (7.19) and  Mike Richards (5.86). Booth has been playing very well, and has had more of a propensity to crash the net and play to his size over the past month, and the numbers are proving it.

The flurry of recent  trades will of course have a tremendous effect on the powerplay. Five of the 11 Panthers who've amassed over 60 minutes of PP ice time have now been dealt, and as you can see many of them played an integral part in the recent  turnaround, most notably last month's PPE standout Cory Stillman (2nd), and powerplay quarterback Dennis Wideman (3rd).

Expect the powerplay to take a hit during the month of March because of the current glaring holes, but it all depends on who on the roster can step up. Jason Garrison might just be one of those players; he was involved in 4 of the 9 Panthers powerplay goals over the last month, and had his PPE raised to 2.4 from 0. He still has a long way to go, but this is the type of initial progress the Cats will need to continue their improvements.

Jack Skille, Niclas Bergfors and Sergei Samsonov will probably have ample opportunity to make an impact, but the big question mark is Panthers leading scorer Stephen Weiss. Despite seeing marginal gains, there weren't leaps and bounds of improvement seen in Weiss' powerplay game over the past month such as we saw with Booth. It's possible that the pounding of a constant stream of trade rumours came into play, but for Weiss to establish himself as one of the better players in the league he's going to need a larger impact on the powerplay, regardless of off-ice distractions.

In any case, coach Peter DeBoer will have his work cut out in keeping up the pace.

What do you think about the Panthers powerplay? Who would you like to see replace some of the main cogs in the Cats "one-up" squad?