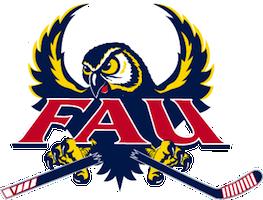 FAU's participation is notable on several fronts: head coach Peter Worrell was a legendary member of the Florida Panthers for five seasons, the club plays its home games at Saveology IcePlex in Coral Springs, and the school's main campus is in Boca Raton, all lending a truly local flavor to their appearance.

More background on FAU's season and entry to the national spotlight can be found here courtesy of the awesome HockeyYall.com; further info on FAU's hockey program is located at their website. All tournament games can be viewed live via FastHockey at no charge.

Thanks to Don H. for the heads-up.