Panthers /fans have been discussing the possible new jersey for next season ever since news was leaked. Fans wondered if the third would become the new home jersey or if the Panthers would bring back the original red or would it be something completely different? Up until now, no one has known what it will look like, but we at Litter Box Cats have gotten our hands on a concept of the final graphic, subject, of course to league approval.

No, don't ask how we got it. We're sworn to secrecy. The new look and discussion after the jump. 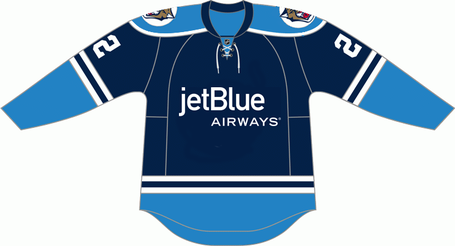 The new look Panthers home jersey is much like the current third. The Blue, though similar to some of the Penguins' alternates, is perfect for the Panthers new Blueprint. This will also allow the team to continue the very popular "blue outs" will introduced this season. Also subject to league approval is Team President Michael Yormark's idea to change the team name to the Florida JetBlues. As he explained earlier this week, "From a marketing standpoint, I'd like to think we're out of the box. We like to do things on the cutting edge."

He also relishes the idea of getting sponsorship on the jerseys, saying "The dollars that have been generated in European soccer with jersey sponsorships have been absolutely enormous. I do believe it presents an incredible opportunity, and I'm hopeful that one day it's something the National Hockey League does take seriously."

The Panthers seem to have decided that "one day" should be "as soon as possible" and have taken steps to introduce the newest frontier of sponsorship to the National Hockey League. The Panthers' heritage will be signaled with the Panther shoulder patches, much like how the Calgary Flames use the old Atlanta Flames' logo as the "A" on their alternate captains' jerseys.