The Canadian Junior Hockey League and Hockey Canada announced late Friday that Hamilton (Ontario Junior League) Red Wings forward Zach Hyman has been named as their 2011 Player of the Year. A second-year captain and his club's leading scorer, Hyman topped seven other outstanding candidates from among the ten leagues united under the CJHL. This award is the highest honor bestowed upon a Junior-A player; past winners include such familiar names as Dany Heatley, Paul Kariya, and (a very pre-Duff) Mike Comrie. 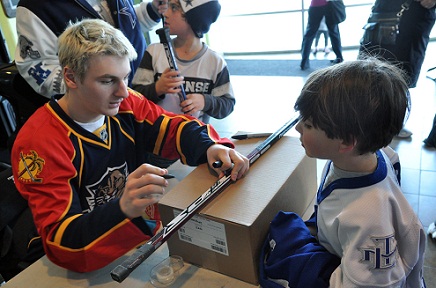 A fifth-round pick of the Florida Panthers in 2010, the 6', 195-lb center is exploring his collegiate options heading into next season, with business or medicine being possible courses of study while continuing his progression to the professional ranks in hockey. 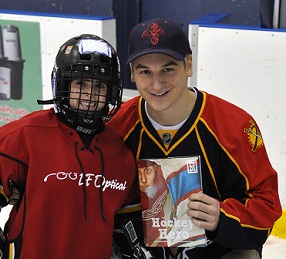 He's also an author; his first published work, Hockey Hero, is a children's tale following the adventures of an underdog youth hockey player. A second title, The Bambino and Me, will arrive later this year.
Zach, 18, was kind enough to take a few moments just prior to his Big Night to answer a few questions for LBC (and our sincere thanks to him for accommodating us during a hectic week for the guy!)...

Q: What were your initial thoughts upon hearing you had won the 2011 CJHL Player of the Year award?

A: When I was notified by Hockey Canada that I won the award I was excited and appreciative, but humbled at the same time. There are so many talented players across the Canada, many equally deserving of recognition. Winning this award means a lot to me. It also carries much responsibility because I still have a lot to learn and I am eager to continue improving in all aspects. The list of past recipients includes many quality hockey players and outstanding NHLers. It’s a very special award, one a player dreams of receiving. I will forever cherish this award, and continue to work hard so I may become the best player that I can be and contribute to the Panthers when called upon.

Q: How will you prepare over the summer for your first season of collegiate hockey? Any new workout/strengthening programs on tap?

A: I’m really looking forward to playing. I’ve been following a strict routine that includes daily on-ice training and off-ice training as well as proper nutrition. It was great attending last year’s Panther rookie camp. The camp was well organized and it taught me many valuable things. I saw first hand how talented the Panther prospects were and it encouraged me to continue to work hard and push myself.

Q: Whom do you model your game after, if anyone?

A: I watch a lot of hockey and love the NHL, but I really can’t say that model my game after anybody. I love to play and am very passionate about hockey. I always work hard in practice and in the games. I’m the type of player that drives to the net hard and will not be denied. I also know the importance of playing two-way hockey and I work hard on both ends of the ice.

Q: Who has been your most important inspiration, in or out of the sport?

A: My parents, coaches, and teammates. My parents have always been there supporting me, encouraging me to follow my dreams. My Coaches for teaching me what I need to know on and off the ice. My Teammates for helping me continue to develop as a player; for working with me, celebrating and enduring wins and losses.

Q: With all of your other pursuits, what prompted you to take even more of your already limited time to write Hockey Hero?

A: My main focus is hockey. Hockey means everything to me. I live, eat, sleep, drink hockey. I also enjoy writing. It’s a hobby that helps me remain creative and express myself. It’s important to take the time to do the things that you enjoy.

Q: Have you ever visited South Florida, either before or after the 2010 draft?

A: When I was younger my family came down to South Florida on a vacation. I love Florida, the people are very nice and the weather is great. It’s neat walking out of a cold arena into a world of sunshine and palm trees. Florida is a great place to play and I am excited to live there and contribute to the community.

Q: And the obligatory capper: where is your draft sweater hanging?

A: It’s framed and hanging on my bedroom wall.

- Our congratulations to Zach on this momentous occasion. Want to learn more? Matt Reitz published a terrific writeup on Hyman last August at View From My Seats; the Toronto Star's Dave Feschuk has a more recent wrap here.