Under GM Dale Tallon, the Florida Panthers are attempting to shed the underachieving image they have portrayed to the NHL for so long now. Tallon and fellow Panther brass are attempting to instill a culture in Sunrise that hasn't been seen since the glory days of The Rat: a culture of success, of winning and accountability through performance. By building an organization through the draft, Tallon is tying the bulk of the club's future success to a youth movement fueled by a mammoth number of early-round selections in the last two offseasons (a few picks of which can be rightly credited to former GM Randy Sexton in 2009).

With Florida turning in a rather (though not unexpected) dismal showing in 2010-11, they find themselves rewarded with a second straight third-overall pick in this year's draft, thereby giving management the opportunity to select yet another soon-to-be-coveted asset to aid in a massive rebuild effort.

Tallon, with recently hired head coach Kevin Dineen riding a very close shotgun, are looking to fill Florida's roster with the modern stereotype of effective players: big, fast skaters who are not only talented with the puck, but play hard and gritty without it. Kitchener Rangers captain Gabriel Landeskog is exactly that and, if selected by the Cats, could fill a remarkably glaring need for a physical, forechecking forward with a great scoring touch and nose for the net. Landeskog also has the intangibles which the organization is looking for in a top-3 pick: offensive ability, defensive responsibility, and leadership qualities. Landeskog has exhibited all three in spades during his time in the OHL with Kitchener, serving as the first European captain in franchise history. 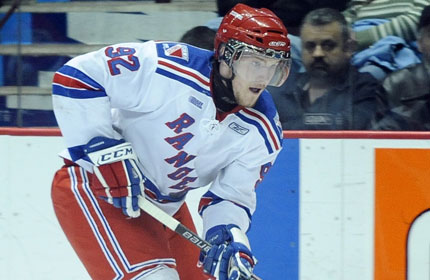 "He may not have that flashy offense that many would love to see in a top five pick, but Landeskog just has everything else that its hard to pass him up. While Ryan Nugent-Hopkins and Jonathan Huberdeau both have concerns (as to) whether they can fill up their frame and be in NHL-ready shape, Gabriel Landeskog comes in ready to play."

His play is similar to that of current NHL All Star Mike Richards, and if Landeskog is selected by the Panthers, he will likely be groomed into a leadership role along with current veterans in the lineup, as well as a few of the upcoming prospects, such as Erik Gudbranson or Garrett Wilson. Florida has long had a need for a gritty, high-intensity scoring forwards with strong leadership qualities and Landeskog is definitely just that. If selected he would be given an honest chance to crack the lineup for 2011-12, but knowing Tallon's desire to transition his current crop of prospects into the NHL the "proper" way (i.e. not rushed), one could reasonably expect to see Landeskog spend a season elsewhere for further maturation. A bit more, and well worth the few minutes...

Keep up with all the Mock Draft selections at SB Nation's hub here.