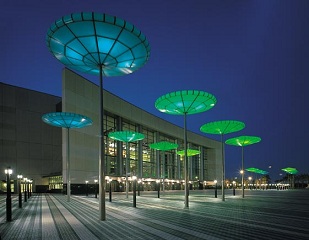 A poll and more after the jump...

We've heard the recent rumors of lower-level bars and some signage upgrades, but the almost certain-to-be controversial proposal goes much further regarding refurbishments to the BAC:

"...new digital signs indoors and out, a new center-hung scoreboard where sponsorships could be sold, a 700-seat members-only club for patrons who pay for an annual pass to all events, with food, drinks and parking included, and where they could watch events; a "patio’’ bar amidst the lower level seats where fans could stand and drink a beer while watching the show or game; smaller suites or "opera boxes’’ that seat four or maybe six visitors instead of the 15 to 20 the larger suites accommodate now; and a new curtain system that would allow the top level to be blacked out so that smaller concerts could be booked without concern that the huge arena would look empty."

Difficult to remain on-topic when "a new center-hung scoreboard" is being discussed, but wipe the stars out of your eyes; this is indeed a large order during a tough economic atmosphere when municipalities struggle to keep even basic community needs afloat.

No doubt the building's attractions draw from a vast swath of the South Florida region - and beyond, making for a formidable revenue stream beaming directly into the city of Sunrise (in the form of jobs and local patronage) and the county as a whole.

The club is not asking for 100% assistance; exactly how much has been requested is as yet unspoken, but in the words of county commissioner Lois Wexler, "(the Panthers' pitch) involved public funds, and it was unacceptable to me, their proposal. And I very clearly and loudly said (that)."

Yes the BankAtlantic Center is a gorgeous facility; not flawless, but unquestionably one of the finest sports and entertainment venues in North America. It reportedly makes a lot of money, given the diverse events and marketing programs which have supported the building during ten seasons of generally lousy hockey from the anchor tenant.

Easy to take advantage of the situation by milking the barn for all it's worth until rebar begins splitting the concrete, and then cry to the county for desperately needed upgrades. As Yormark commented, "it's been maintained very, very well," but to remain competitive in the modern marketplace, the building must evolve.

The question is at cost to whom? Many more details - all of which deserve their moment in the spotlight - at the Sentinel link above.