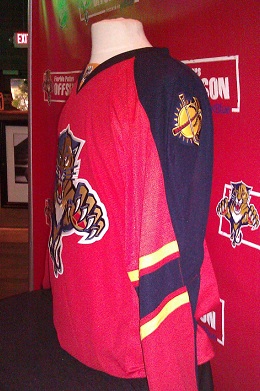 The Florida Panthers organization is taking a new direction in the 2011 Entry Draft by drafting Jonathan Huberdeau, and to accompany the change is the eagerly awaited unveiling of the new Panthers home jersey, and boy is it RED. For the first time since 2007 the Panthers will return with red as the primary color on the home jerseys, bringing back memories of happier times for the team. More after the jump...

The new jerseys are not exactly a color switch from the old homes; the new red jersey doesn’t include the despised gold piping of the blues. Other than that, not much seems to have changed, but that’s not exactly a bad thing. With the shoulders switched to navy blue the golden sun shoulder patch is much more pronounced, whereas it faded in a bit on the red background. Luckily, the same leaping panther logo is used instead of the ‘happy cat’ logo of the third jerseys, but we already knew that. Panthers fans agree unanimously that the jersey could use a stripe across the bottom like the old red jerseys had, even though the stripe-less blue jerseys got away without it. The difference? The old blues didn’t need the strip because of the gold piping, which defined the seams of the jersey and took away from some of the negative space below the logo. Without piping or a stripe the jersey seems—empty.

Overall, we got what we wanted, a red jersey! Sure, it might have deficiencies here and there but realize one of the biggest knocks on the blue home jerseys was that they seemed too busy especially with piping shooting across every seam. The designers of the new jerseys were likely trying to capture some of the classic simplicity of other jerseys when they envisioned the team’s new look. Can’t complain with that.

Let’s just hope the return to red can spark a return to the team’s winning ways.

The red away jerseys used until 2007 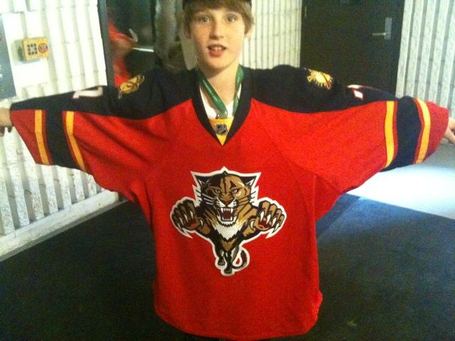