This is part one of a two part series, in which we'll cover the few Panthers prospects who have a serious and legitimate chance at cracking the Panther lineup in the 2011-2012 NHL season. Read on!

As development camp rolls around tomorrow, many Panther fans will get a chance to watch the future of the Florida Panthers on the ice. For some of these prospects, this is the first taste of what it will take to reach the NHL, both on the ice and off. Some will come to training camp this fall and exceed expectations, having learned much from development camp, juniors, college or the AHL, and took the initiative to work hard in the offseason to improve their chances of becoming a full time NHL player. Some won't, and hopefully will start to understand just how hard they have to work to have a chance to wear a Panthers sweater some day.

Since Dale Tallon took the general manager position of the Panthers, fans and media have heard countless times how the team intends to build itself primarily through the draft. As evidenced by two seasons of solid draftng by Tallon, assistant GM Mike Santos and head scout Scott Luce, they are backing up their words. It certainly helps that the Panthers haven't had great regular seasons the past two years and have picked in the top three twice in those two years, but Tallon and Santos have also made a lot of deals to acquire more picks and in some cases, move up the draft board. The more, the merrier, as they say, and that certainly applies to draft picks for a team that is rebuilding itself from the ground up.

With all of the picks the club has collected over the last two seasons (and even before that, during the final years of the Jacques Martin and Randy Sexton era), there are a lot of players competing for what seemed like a lot of roster spots. That is, until July 1, 2011 rolled around, and Tallon and Santos brought in eleven new players through free agency and trades over the next ten days. The room for prospects on the opening day roster for the Panthers is slim and competition for jobs got that much harder for players. The pressure to push AHL or junior level players into the NHL isn't really an issue anymore, as the depth of the NHL roster has grown significantly, and players now have to work hard and play well for ice time. For the first time in awhile, you had to earn that palm tree on your shoulder.

So who can we expect to see at development camp that has a legitimate shot at making the team this season?

The first thing we should consider are the current roster needs. There's obviously one major element this team has lacked in previous seasons: scoring. There's a huge need for players who can put the puck in the net, regardless of size or speed. The Panthers don't have a superstar in the same vein as Sidney Crosby or Steven Stamkos or Alex Ovechkin (yet), so they clearly need to have a solid scoring-by-committee approach to compete with the teams that have game-breaking players such as the ones mentioned. Any player that can provide consistent offense is going to have a shot at making the team.

On the defensive side of things, the Panthers have a lot more depth and getting ice time as a top-six defenseman on the team is going to be tough. With established veterans like Brian Campbell, Ed Jovanovski and Mike Weaver, the younger players are going to really have to compete for spots. It's likely Dmitry Kulikov is a lock for a spot after his play last season, and the same goes for Jason Garrison, who continues to develop into a solid option at the blue line. The final spot is wide open, though Keaton Ellerby has an edge on nabbing the final spot, for now.

In regards to goaltending, it's clear that Tallon does not want to rush top prospect Jacob Markstrom, so he will likely see time in the AHL this season, though due to injuries there's a chance he'll see some NHL ice time. Expect a healthy competition for the starting job though, as both Scott Clemmensen and Jose Theodore are going to battle throughout the offseason and regular season to see who gets the majority of the spots.

Now that we've discussed what the roster is lacking, let's look at the players who are eligible to play in the NHL this season that have the best shot at cracking the lineup come opening day. 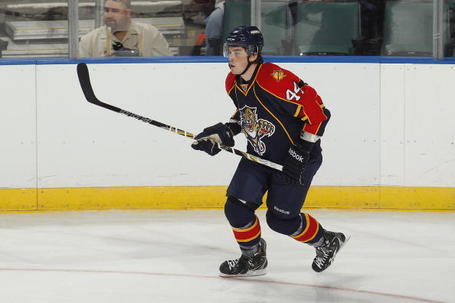 Erik Gudbranson, D - The depth at defense is much better this season for the Cats, but if any defensive prospect can make a spot for themselves, it's Gudbranson. He likely would have played the entire season last year for the Panthers, but management wisely sent him back down to juniors, saving him another year of eligibility on his rookie contract. He's going to be determined to make the big club this season and is likely going to be one of the most noticeable players on the ice at both development and training camps.

Gudbranson had a somewhat difficult season in 2010 with the Kingston Frontenacs, serving a pair of suspensions for his actions on and off the ice. Some scouts believed he lost a bit of motivation when he was sent back to juniors and that it showed in his play. Still, he posted respectable numbers and showed maturity by resolving his organization issues with Kingston and finishing out the season. Gudbranson is as NHL ready as any prospect in the Panthers organization, and although Tallon and company do not want to rush their top prospects, it might be pretty hard not to award Gudbranson with a roster spot if he has a solid set of camps. He will mature into a very solid, nasty physical defenseman for the organization and will hopefully be able to contribute on special teams thanks to a booming slapshot. He is likely the player to watch this training camp.

Quinton Howden, C - Howden had another dominating year in juniors with the Moose Jaw Warriors, posting more points in less games than the previous year (79 points in 60 games, with 40 goals). He has continued to fill out physically and continues to absolutely fly on the ice, and has speed similar to that of current Panther favorite David Booth. He's been using that speed to continually work on his two-way play as well; he posted a respectable +7 rating during the regular season. Howden was also recently invited to the Candian World Junior Championship camp, where he'll audition for a spot on the team.

At 19, it's likely the Panthers send him back to juniors for one more season, as the club has stated they do not want to rush their top prospects. Still, a player like Howden is very intriguing coming into camp, as his speed and size could be a huge asset for a team that's relatively weak down the middle. If Howden is able to make a strong impression in camp, there's a good chance he could play quite a bit during the preseason and get some NHL-level play under his belt. For a team starving for offensive production, Howden's flair for finishing his chances could mean we see him in a Cats sweater sooner rather than later.

Garrett Wilson, LW - Wilson had a fantastic breakout season with the Owen Sound Attack of the OHL, serving as the team's captain and leading them to the OHL finals alongside Colorado Avalanche prospect Joey Hishon. Wilson has improved his game every season he's played in the OHL, and this past season he reached the 40 goal plateau for the first time. He was also a very impressive +33 on the season, and is evolving his game further to become a solid two-way player. Coaches in the OHL have previously voted him as the hardest working player in the league, and if he's going to reach the NHL, his two-way play and scoring touch will have to translate. He fits the bill though for the Tallon "blueprint": high character, hard working, talented, fast and big. He's got all the tools, but he'll need to show they translate to the NHL level.

Wilson also had a memorable playoff run with the Attack as well, but unfortunately his postseason was ended with a concussion, so there are concerns that he may have some long-term injury issues, although there has been nothing reported that would lead Panther management to worry. In fact, Tallon recently signed Wilson to an entry level contract, and it's expected he'll be ready to compete for a spot at left wing this fall. At age 20, he's eligible to join the Panthers AHL affiliate in San Antonio, so it's likely that if he doesn't make the club this season, we'll see him with the Rampage in the near future. Wilson is likely a longer shot to make the Panthers than Howden or Gudbranson, but he's got the right mix of intangibles and it's very possible he'll impress enough in camp to earn a spot on the team.