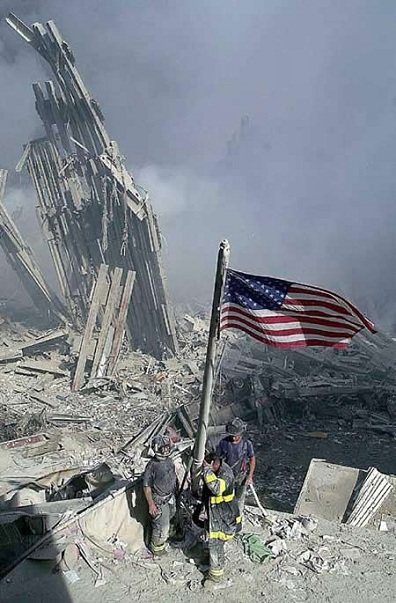 "The battle, sir, is not to the strong alone; it is to the vigilant, the active, the brave."

We welcome and honor your memories of September 11th, 2001 in the comments section of this thread. As always, please no political discussion for obvious reasons. This is an important day on so very many levels, and we'll not ignore the significance as each of us faces the 10th anniversary in our own way. Say anything, say nothing.

Myself, I began working the second shift for a fixed base operator at Bradley International Airport (Hartford) ten years ago yesterday. I was only beginning to grasp the responsibilities of the "night" aspect of my new position when just a day later United 175 flew almost directly over my home in Connecticut en route to lower Manhattan. Several hours before my expected arrival at work - and well after the four hijackings - I discovered my company's portion of airport property - including hangars - would be used as triage sites for the inevitable thousands of injured souls expected to be pouring in from the south. As I clocked in, 7 World Trade fell. Over the next few hours, hangars were cleared, ramp space was made readily available, and local roads were empty of traffic in anticipation of what could only be a crazy, angry, and otherworldly evening. All eyes were on the sky as an anticipation of dozens of helicopter refuelings were a very real expectation. As fate would have it, none of those actions were needed.

For me, the preparation to receive the World Trade Center's wounded and the absolute absence of ambient noise at my international airport in the wake of the nation's airspace shutdown were likely the most dramatic realizations of living in a very strange new universe not of our making, among so many other emotions and experiences.That's my story so far; we welcome yours.