As we sit on the precipice of the 2011-2012 NHL season and soak in all the adulation surrounding the playoff-bound Florida Panthers, many of us look back at the season and recount the ridiculous highs and familiar lows of a team that has surprised not only the Panther faithful but the rest of the hockey community. Despite the means by which Florida clinched their first postseason berth in twelve years, many fans are optimistic the team can turn around it's late season woes and start winning when it really matters. In any case, fans and the organization are just thrilled to be relevant again, even if it is only for a moment. It's up to the Panthers to make it much longer than a moment.

Regardless of what happens in the playoffs, there's no debating that the Florida organization made leaps and bounds in its "blueprint" that General Manager Dale Tallon set forth to implement when he was hired. The team is on the right path, but there's still plenty of work to do, and there are a lot of puzzle pieces still being put into place. Let's take a brief look at some of those pieces, and analyze why the coming seasons should exceed the successes the Panthers had this season.

Though not all products of the Tallon Administration, much of the Panther prospect pool is among the top of the barrel around the varying developmental leagues. Some have even recently graduated to full-time NHL jobs (D Erik Gudbranson, D Keaton Ellerby). Many others already in the organization are baby steps away from making the jump (D Colby Robak, G Jacob Markstrom, and D Alex Petrovic, just to name a few). What truly sets Florida ahead of most of the NHL in terms of their prospect depth, though, is the young men slated to push for a lineup spot over the next two seasons. 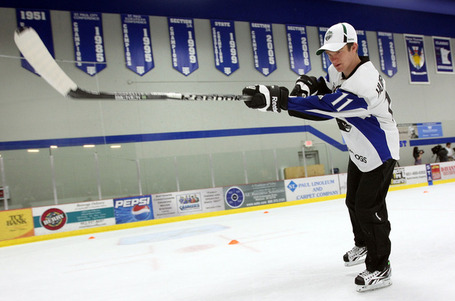 Last year's top pick Jonathan Huberdeau is again tearing up juniors despite missing time this past season with injury. It seems almost a foregone conclusion that he'll make the Panther lineup next season, unless management again feels he wasn't able to add enough mass to his somewhat-slight frame. His offensive skills are sorely needed on a Panther squad that will likely finish the season with the 26th ranked offense in the NHL. Quinton Howden is likely on the doorstep as well, as he had himself another great season in juniors and should compete for a spot at wing. Nick Bjugstad is currently rumored to be mulling over a contract offer from Florida and may consider leaving school early to make the jump to the pro game. He dominated at Minnesota this season, along with fellow Panther prospect Kyle Rau (who will return for his sophomore year at Minny, most likely), and is big enough and smart enough to transition to the NHL with little trouble. Drew Shore recently signed an ELC with the Panthers and reported to the San Antonio Rampage of the AHL to help them in their playoff pursuits. Shore had a fantastic junior year at Denver and seems eager and ready to make the leap to the pro game as well. He'll likely start next season with the Rampage, but if he has a solid camp it wouldn't be shocking to see him in a Panther sweater on opening night.

On the defensive side, the parent club needs less help, as Gudbranson and Ellerby have filled in nicely during their time so far. However, Petrovic and Robak will help fill any call-up needs in the short term, and one or more of those players could indeed crack the Panther roster with a solid camp and preseason in 2012. Tallon draftee Rasmus Bengtsson could also make his way over to North America to start the next AHL season with the Rampage, and projects to be a top-four D-man when he gets here. 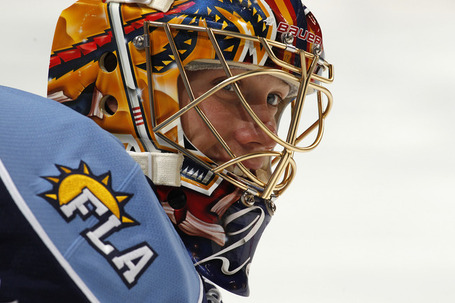 I'd be remiss if I didn't mention Jacob Markstrom, who is also seemingly ready to take Scott Clemmensen's job next season, if the Panthers don't re-sign Clemmensen. The Alien saw more NHL time this season and was excellent, and despite another knee surgery, he returned to the Rampage and put up some solid numbers during their push towards a spot in the postseason. Prospect Sam Brittain also returned from a knee injury to have a great finish to the season and looks to fill in the organization's goaltender depth after the departure of Tyler Plante, Alexander Salak and Mark Cheverie.

There are several other members of the Panther prospect pool that could potentially surprise and make the jump next year, such as John McFarland, Connor Brickley or James Wright.

Taking Care of the House Cats

The Panthers have several expiring contracts to address during the offseason, the most prevalent ones being UFA Jason Garrison, RFA Dmitry Kulikov and RFA Kris Versteeg. Word on the street is that the Panthers pitched Garrison an offer for several years at approximately $2.5m per, but his camp balked and he will likely hit the open market. While there's no question Garrison was an invaluable part to the Panthers this season, most believe he had a banner year and will likely not match his goal totals consistently. However, his play this season went beyond goals and it will be interesting to see if the Panthers try to retain him at a higher price. Kulikov is in the same boat, but is younger than Garrison and has seemingly greater offensive upside at times. Not to mention Kulikov will likely be had a cheaper rate than Garrison, which leads me to believe he'll be back. Versteeg had a great year until the final third of the season, when he was seemingly playing hurt and slowed down his production drastically. Still, he's no doubt a catalyst player for the offensive attack of the Panthers and a fan favorite during his short tenure in Sunrise. It'd be a shock not to see him return. 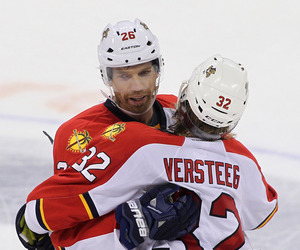 Mikael Samuelsson, Marco Sturm, Krys Barch, Scott Clemmensen and John Madden are all UFAs as well, and it's entirely conceivable that Tallon and assistant GM Mike Santos will only try to bring back Samuelsson. At 35 years of age, he's reaching the tail end of his career, but still contributes on a regular basis and is a powerplay specialist. It's likely the Panthers will tender him a two-year offer but he may receive enough interest from other teams that appeal to him more. Barch could be brought back for the toughness element, but he found himself on the healthy scratch list a bit too much for me to think he'll return. Sturm and Madden were, for all intents and purposes, filler players on this year's roster, though their contributions were certainly noted. They will likely not be brought back. Clemmensen is the biggest mystery, as he had a pretty good season and is a solid backup goalie. If the Panthers feel that Markstrom isn't quite ready to make the jump, expect Clemmer to receive another offer from the Panthers. My guess is that he's gone, however.

Last but not least, RFAs Wojtek Wolski and Keaton Ellerby present the Panthers with some interesting choices. Wolski is an offensive talent and a shootout specialist, something Florida clearly lacks after setting an NHL record with 18 overtime/shootout losses. I'd be surprised if the Panthers don't make him an offer, but he may decide to take his skills elsewhere if the offer isn't right. Ellerby broke out a bit this season, playing some pretty good minutes when the Panther blueline started to suffer some injuries, and is a serviceable bottom pairing NHL defenseman with some upside. I wouldn't be surprised to see him back with another short-term deal, as Florida doesn't have a ton of depth in San Antonio to replace a guy like Ellerby.

After the ridiculously fun free agency shopping spree Tallon and the Panthers had last summer, this year's free agency period should be significantly more quiet for the Panthers. However, there are going to be some quality players available during the offseason and you can be sure Tallon and Santos will be in the mix. Perhaps the biggest name is Zach Parise, who still has not been re-signed by the New Jersey Devils and could test the open market. Some of the other interesting forwards on the market include Alexander Semin, Ryan Smyth, Shane Doan, Jarret Stoll, Andrei Kostitsyn and plenty more. It's likely Florida won't try to sign a big-money player like Parise or Semin with the CBA likely being changed, but it's not entirely out of the question.

Keep on Keepin On

The Panthers sure have a bright future ahead of them when you look in the pipeline. Solid drafting by Tallon and the scouting team has ensured that the Cats will have continuous talent coming into the fold over the next several years. What Tallon is often knocked for is his cap management abilities, which is probably a big reason why Santos was brought on board. With the upcoming labor negotiations and likely a revised CBA, the Panthers will have to continue to build from within as well as through free agency and retain the valuable pieces they already have without crippling the team's ability to sign future assets. It will be an interesting offseason for the Panthers, but for the first time in twelve years, not a single Panther fan is looking forward to the draft lottery in April. It's playoff time, and the Panthers will be taking this opportunity to try and restore a winning tradition to a franchise that sorely needs it.