Roster Roulette is a three-part feature that will look at the potential lineups, based on position, that the Panthers could be putting on the ice next season. Part one of three highlights the forward position, so read on and stay tuned for part two where we look at defensemen.

After their most successful season in a decade, the Florida Panthers and general manager Dale Tallon go into the offseason with some difficult decisions to make. Although the team clinched their first ever division title and nearly advanced to the second round of the Stanley Cup playoffs, there were a lot of areas that left both management and fans with much to be desired. The Cats again finished near the bottom of the league in goals per game (27th overall at 2.4 goals per) despite being 15th in the league in shots per game (29.7 shots per). That would lead to one very obvious conclusion: the Panthers need more scorers, and as an added bonus, scorers that can help the team perform better in shootouts.

The needs don't stop there, however. With several UFA's and RFA's on the roster, Tallon and assistant GM Mike Santos will need to figure out which pieces of last year's puzzle need to be retained, and which pieces can be parted with to make room for either upcoming prospects or new free agency acquisitions. With plenty of cap space, the Panthers have room to make some signings, but will need to be cognizant of the upcoming CBA negotiations, as well as leaving cash open to sign some of the stud prospects that are on their way up the professional hockey ranks.

Knowing all this, let's take a good guess at what the lineup could likely be for the puck drop of game one next season, and delve into why certain players are staying, going or kicking down the door and making a spot for themselves.

The most pressing need for the Panthers is to jumpstart the offense. Despite the team giving folks the illusion that they had much more offensive firepower than last season, the 2012 Panthers only outscored the 2011 Panthers by six goals (!!). Not to mention that the Panthers defense scored a little over 15% of the team's regular season goals, which puts them among the top ten in the NHL for percentage of goals scored by the defense. Offensive production from the forwards is definitely an item management wants to address as it's a big reason the Panthers skidded into the postseason rather than glided. 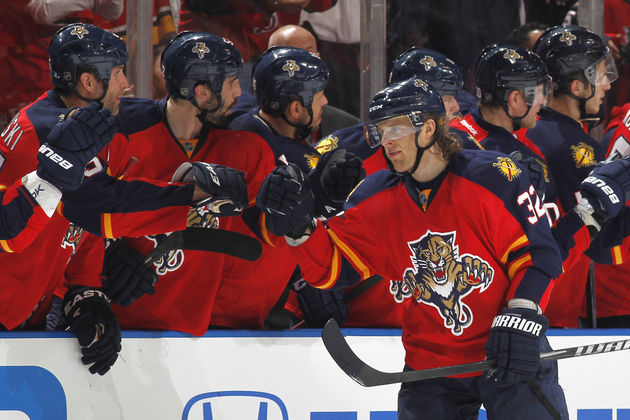 The top line of Stephen Weiss, Tomas Fleischmann and Kris Versteeg started off at a torrid pace, but tapered off as the season progressed due to injuries and the rest of the NHL realizing that you can't give them the kind of time and space they were receiving earlier in the year, when the line was not a known quantity. Versteeg is an RFA whose contract is expiring, and due to his top-line role with the team, he will likely be re-signed and given a raise. Considering his last deal was for just under $3.1m a year, it wouldn't be a shock to see him signed for something closer to $4m per. Versteeg has expressed interest in signing a long-term deal with the Panthers.

The surprisingly effective second line of Marcel Goc, Sean Bergenheim and Mikael Samuelsson didn't form until later in the season, but was one of the best lines for the Panthers in regards to plus/minus and came up with plenty of timely goals. Goc and Bergenheim were free agency acquisitions last summer, when Tallon went on his now-infamous "Floorida" shopping spree, but Samuelsson was acquired as part of the David Booth trade and will be an UFA when the offseason hits. Once he got over his initial core injury, his play was generally great, as Samuelsson is the type of smart puck possession player head coach Kevin Dineen covets. It wouldn't be surprising to see Samuelsson brought back, though at 35, he's nearing the end of his NHL tenure and may want a longer-term deal that Tallon won't be willing to provide.

There are several other RFAs/UFAs that could be retained, but likely won't be. Wojtek Wolski was brought in near the trade deadline to provide some offensive spark and to help in the shootout, and although he had a great first ten games with the Cats, he found himself a healthy scratch due to his lack of effort at times. John Madden is an intriguing option, although with his age it would be surprising to see him back. He was a defensive and PK specialist again and excelled at it, as well as in the faceoff circle. He also had a great playoff series against the New Jersey Devils and was one of the better Panthers in that series. He certainly proved he can still play, but perhaps not a full 82-game schedule.

Krys Barch and Marco Sturm are UFAs and are seemingly going to be gone. Barch was a healthy scratch quite often and Sturm had a lot of trouble staying healthy throughout the season. It's likely these guys will be let go to make room for any upcoming youth the Cats want to insert into next season's lineup.

Santorelli found himself in the doghouse for the final half of the season, as he would often disappear for large stretches of time and was generally unproductive playing fourth-line minutes with grinders like Bradley and Barch. He will likely be either traded or possibly even bought out if the Cats manage to find someone to take his place, whether that be through free agency or otherwise, and that seems very likely.

With all that said, here's a very likely lineup for the Panthers to start next season:

Clearly the Panthers need some more depth at left wing, and since it's been repeatedly said that the organization will not rush prospects, it's not likely the Cats will go with two rookies at the position to start the year. There seems to be a clear consensus that rising star Huberdeau will be ready for the NHL next season, as he played at nearly a 2.0 point-per-game pace in the QMJHL. However, he will only be 19 by the start of the next NHL season, and there are still some questions about his frame and whether or not he can handle an entire 82-game season. Howden is older and larger but is just cracking in the AHL this postseason and may need additional time to develop. However, I would expect both to crack the lineup out of camp and at least earn a nine-game tryout before being sent back down, with Huberdeau sticking with the big club the entire season. 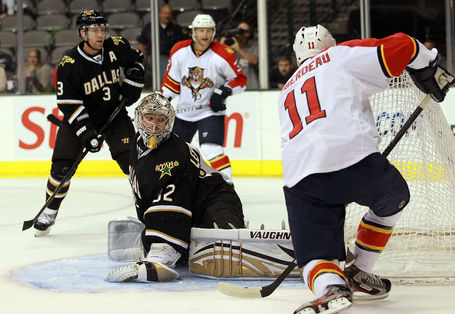 There's certainly plenty of opportunity for this proposed lineup of forwards to change as well. With the incredible amount of upcoming talent in the Florida farm system, the Panthers will have the luxury of letting some of the upcoming rookies compete for and earn starting spots on the big club this offseason. Guys like Drew Shore, Howden, Vincent Trocheck, Huberdeau, James Wright, John McFarland and Nick Bjugstad (if he foregoes his senior year) will all be given a chance to show they are ready for NHL action, although it's likely maybe three out of the entire group will see time with the Panthers next season. Huberdeau seems like a lock, and it's very likely Howden and Shore will continue to spend majority of their time with the San Antonio Rampage and perhaps be called up by the Cats in case of injury.

Also, let us not forget the frenzy that is free agency. Although the Panthers aren't likely to go for the top tier of free agent forwards, such as Alex Semin and Zach Parise, they could be in play for other rising players that could be acquired at a better price and a shorter term. You can be sure that Tallon and Santos will be working the phones come July trying to improve the team in any way possible.

The roster certainly looks better with an elite offensive talent like Huberdeau in the starting lineup, but will it be enough? The Panthers certainly won't rest on the successes of the past season and are clearly looking to improve offensively, and so we will likely see that evolve over the offseason in several different ways. With the organization sticking to it's decision not to rush prospects to the NHL, the Panthers may be significantly more busy during the offseason than many would think as they try to shore up the biggest weakness of the team this past season. It's very likely that Tallon will make some trades as well to make room for other players, so it won't be surprising to see guys like Santorelli no longer in a Panther sweater come September. Only time will tell.

Regardless of what occurs, it will be an interesting offseason for Panther fans, who instead of witnessing yet another roster rebuild will finally see a smart and calculated effort to add pieces here and there to compliment an already-successful lineup. If Tallon and his staff can fix the offensive woes the Panthers faced during last season, a second Southeast Division title seems very likely.