It seems almost a foregone conclusion that at this point, the Panthers are likely not going to be able to retain the services of blossoming (bloomed?) defenseman-slash-cannon Jason Garrison. After a season in which he shattered his previous point totals and tied the club record for most goals by a defenseman in a season (16), Garrison cemented his status as an important fixture on the blueline for Florida, and the club clearly was a different one without him on the ice. Garrison's impact on the powerplay was very apparent, and his chemistry with the newly-acquired Brian Campbell gave the Panthers an impact pairing on both ends of the ice. When Garrison missed some time during the Panthers playoff series against the New Jersey Devils in the Eastern Conference quarterfinals, the Panthers clearly lacked an option to replace him both defensively and on the man advantage, and both fans and teammates were relieved when he returned during the series to bolster the Cats when they needed it most.

Now a few days away from reaching that ever-lucrative UFA status, Garrison clearly has the chance to cash in on the best season of his short yet promising career. It seemed obvious that the Panthers, who have stated that they wished to retain the defenseman, would likely lose out on the contest as Garrison would likely ask for more money than General Manager Dale Tallon and Panthers ownership would want to commit. However, there was hope that the two camps were not far apart and that the Panthers could hopefully compromise and give Garrison something very close to what he was looking for, keeping him in the fold in Florida for the foreseeable future.

Then along came Jay Feaster, voluntarily backing up an armored car full of Benjamins to Dennis Wideman's front door.

Feaster, who just came off a relatively horrendous NHL Draft performance, made a deal Wednesday with the Washington Capitals to acquire the rights to Wideman, giving up Jordan Henry and a 5th round pick in the 2013 draft. The Flames GM then signed Wideman to an unprecedented and seemingly crazy five-year deal worth $26.25m. That's a cap hit of $5.25m a year for a guy who, as Panthers fans know, isn't exactly a paragon of defensive prowess. Wideman, who posted some pretty good numbers last year with the Washington Capitals, is a solid option on the powerplay and will help the Flames offensively, as they finished 27th in scoring last year as a team. Even so, $5.25m a year is a lot, especially considering the gap between Norris trophy winner Erik Karlsson and Wideman, and Karlsson's only making $1.25m more per year.

So aside from sort-of-kinda upgrading the Calgary blueline by paying absurd amounts of money to a guy likely not deserving of it from a performance standpoint, Feaster also set the "overvalue" bar pretty high only a few days before the free agency period begins. So what does that do for our good friend Gary? Allow me to illustrate: 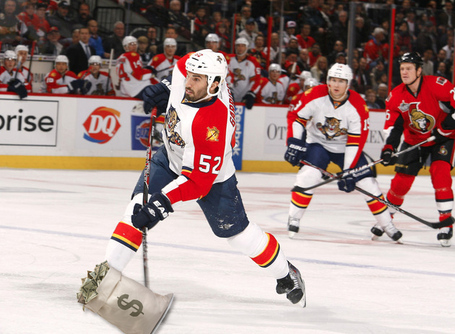 Jason Garrison fires a big old bag of cash into his bank account.

Garrison, who scored 13 less points than Wideman on a much more offensively-challenged team last season, is set to rake in the dough from whoever loses the Ryan Suter sweepstakes. It's believed the Panthers made a fair offer to Garrison, who still has to prove he can be consistent in terms of point production from year to year, but with the Wideman signing the precedent has been set forth and Garrison's services immediately became more expensive. This almost certainly eliminates the Panthers from keeping him unless he's willing to take a hometown discount, and that's almost unheard of for the Florida Panthers, they of one playoff appearance in the last three presidential terms.

The Panthers should start saying their goodbyes to Garrison, as he'll now surely command the $4.5-5m he's likely looking for. At 27 years of age, he's young enough that some team is probably going to throw that kind of money at him for a four-year deal, maybe more, and with the Panthers already committing $16m to the blueline next year (and more realistically towards $20m after Dmitry Kulikov and Keaton Ellerby sign), there won't be much room financially for Gary to stick around.

The big question for the Panthers now is: How do you replace him? Luckily for Florida, the growth of young talent Erik Gudbranson is going to make things easier, as he will likely gain more ice time in Garrison's absence and could possibly replace him on the powerplay, as Gudbranson's shot is not far off from Garrison's in terms of it's ability to bend the fabric of time and space. However, Gudbranson is still young and nowhere near the steady presence Garrison has been his last couple of seasons on the back end. Kulikov could see more powerplay time as well, but he fits the mold of Campbell's playmaking ability instead of Garrison's trademark blast from the point. It will all come down to Kevin Dineen and Gord Murphy deciding what the best course of action will be.

The free agency period is always a time to overvalue players and reward well-timed career years, and this July will be no different. Fortunately for Garrison, and unfortunately for the Panthers, the Wideman deal gave the NHL a clear indication of what the market could be like come July 1, and it's pricing Garrison well out of reach for the Panthers.