Roster Roulette is a three-part feature that will look at the potential lineups, based on position, that the Panthers could be putting on the ice next season. Part two of three highlights the defensive position, so read on and stay tuned for part three where we look at goalies.

In our last entry, we took a look at the forwards that the Panthers would likely retain and what the top twelve would look like. As noted, the Panthers finished the season with a poor goal differential and are likely looking to upgrade the forward position to provide more consistent offensive punch for a team that often times struggled to score. This time around, we're going to delve into the surprisingly strong defensive lineup the Panthers will have available to them for next season, we'll take a guess at who makes the cut for the 2012-13 roster, and who will be on the outside looking in.

As mentioned in our last Roster Roulette article, the Panthers defense scored a little more than 15% of the total goals by the team in the last regular season. Many experts were predicting an uptick in production from the blueline for the Panthers after GM Dale Tallon brought in former Chicago Blackhawk Brian Campbell via trade, but no one could have predicted how that move would significantly affect the existing Panther defensemen on the roster. Paired with Campbell for much of the season, Jason Garrison would see his offensive production reach a level that not even he would have expected, scoring a monstrous 16 goals from the back-end, with many of them of the powerplay variety. Garrison certainly benefited from the time and space the ever-dangerous Campbell provided him, and it wasn't until midway through the season that opposing teams realized they needed to key on Garrison more than Campbell, as the now-trademark blast from the point that gave Garrison most of his goals was the more dangerous threat. Garrison finished the season with 33 points, easily his best season as a pro, and it came at the right time for him, as his contract expired at the end of the season, making him one of the top unrestricted free-agent defenseman on the market. 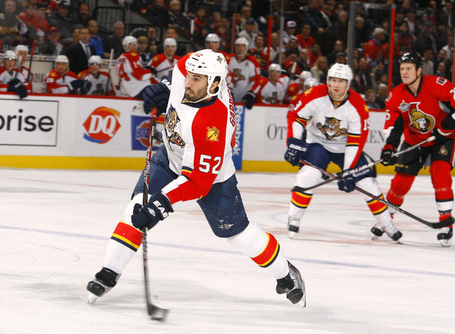 The Panthers and Garrison clearly want to make a deal happen, however, as news has surfaced over the last several days that Tallon and the Panthers are making another pitch to Garrison's agent to keep him in the fold in Florida. Despite having nearly $16 million committed to several of last year's blueliners, the Panthers will need to pony up the cash to keep the rising Garrison, who will be very difficult to replace should he bolt for more money elsewhere. Expect Tallon and the Panthers to push hard to keep Garrison though, as he was a key piece of the defense and powerplay throughout the entire season, and played very well at both ends of the ice.

With veterans Ed Jovanovski, Mike Weaver and Campbell anchoring the blueline, the Panthers can afford to insert some youth into the defensive lineup and be certain they'll learn from the grizzled vets. They did just that several times last season, with the most notable being rookie Erik Gudbranson getting paired for the season with Jovanovski. Gudbranson had a rough start to the year but continued to grow and mature as the games went by, and it seemed he certainly adapted to the speed and pacing of an NHL game by the time the Panthers reached the postseason. Gudbranson was one of the best Panthers during the Cats seven-game series loss to the eventual Eastern Conference champion New Jersey Devils, and looks poised to return next season and continue to get better. That bodes well for Florida's blueline depth both now and in the future, as Gudbranson will likely spend much of his career in a Florida sweater.

Keaton Ellerby saw plenty of spot time last year filling in for injuries, but wasn't able to anchor a solid spot on the Panther blueline, partly due to his play and partly due to the likely desire from management to get Gudbranson plenty of playtime and growth to jumpstart his NHL career. Ellerby is an RFA and there's a chance the Panthers will want to bring him back, possibly with a two-way contract so he's not wasting valuable ice time in the press box. There's also a chance that the Cats try to deal his rights either before or during the draft, as Ellerby could definitely see starting time elsewhere on a team that has less defensive depth than the Panthers. There is legitimate concern, however, that moving Ellerby would be a mistake, as the Cats seem to lack defensive depth outside of the top six starters.

Or do they? Let's not forget last season's AHL All-star defenseman Colby Robak is waiting in the wings in San Antonio, and the up-and-coming Alex Petrovic is also on a quest to earn his place on the big stage. Petrovic and Robak both had great postseasons for San Antonio, with Petrovic being the more productive of the two and surprising many with his offensive production for the Rampage. Still, the Panthers, Tallon and assistant GM Mike Santos have said that they will not rush prospects, and rushing defensive prospects can be especially damaging to their development, so I would expect to see Florida retain Ellerby and keep both Robak and Petrovic down in San Antonio to start the season. However, that's not to say that Robak or Petrovic won't outplay Ellerby in camp and earn a spot; anything could happen.

I'd be remiss to not mention the play of Tyson Strachan last season as well, who also filled in during injury callups and was steady as a rock. The Panthers signed Strachan during the season through next year, so he'll be another guy looking to make his mark in Sunrise. I wouldn't be surprised if we see a lot more of Strachan next season, as he was as steady as they come during his callup time last year.

Aside from re-signing Garrison, the Panthers have a very interesting decision in 21-year old Dmitry Kulikov. A restricted free agent this offseason, he's coming off his best season as a pro in terms of production, but had injury issues during the year that greatly affected his play. Kulikov is young, highly skilled and valued throughout the NHL as an up-and-coming star on the blueline, and there's no question the Panthers would love to retain him as well as Garrison. However, with the large chunk of change already committed to the defensive corps, and with Garrison likely looking for around $4 million a year, the Panthers may not have the financial desire to sign Kulikov to more than a $2-3 million a year deal, and there's a possibility Kulikov could balk and go elsewhere. He's a valuable commodity, and a home-grown prospect for the organization, so it would seem logical that Tallon will want to get a deal done to keep him in a Panthers sweater. If the two sides are far apart though, Kulikov's chances of returning will be slimmer and he could be a very valuable trade asset, especially around the time of the upcoming NHL draft. Tallon has repeatedly stated that he wants to upgrade the offensive production of the team, which means he'll likely be looking to make some moves that could already involve roster players in order to acquire more scorers up front. 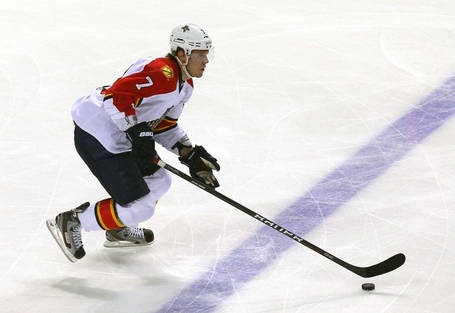 Is it realistic to think Kulikov will no longer be a Panther after this offseason? Probably not, as his age, skill level and commitment to the organization all play in favor of Tallon and Santos wanting to bring him back for several more years. However, the fact that both Garrison and Kulikov are up for deals at the same time, and could both warrant $3+ million a year quite easily, means that the Panthers management will have some tough decisions to make regarding who to keep and who to deal or let walk.

So what's the defensive lineup going to look like? Here's my best guess:

That's right; Garrison's gone. With his age (27), the fact that he's more valuable now than ever, and the depth of the upcoming defensive free agent market, Garrison will likely take the money and run. After big-name defensive free agent Ryan Suter, the market seems to be sorely lacking young top-end offensive defenseman options and Garrison should be able to capitalize on that with a big multiyear deal from another team looking to upgrade its defensive corps and powerplay. The Panthers, with so much money already committed to defense and still needing to re-sign Ellerby and Kulikov, will let Garrison walk and hope that rookies Robak and Petrovic take the next steps in their development to fill in the loss of Garrison.

Kulikov and Ellerby will return, with Ellerby earning a starting spot and taking the place of Gudbranson alongside Jovanovski. Gudbranson will move up to the top pairing with Campbell, providing Campbell with another young defenseman with a cannon of a shot to feed up saucer passes to. Kulikov will get paired back up with former partner Weaver and they will hopefully continue their great defensive play from season's past. Expect Robak and Strachan to receive first honors when it comes time for injury fill-ins, and I would expect Robak to make the biggest impact.

It's All About the Benjamins

Ideally, Florida will keep things the same and bring back Garrison, Kulikov and Ellerby and keep some stability on the blueline for the first time in awhile. Unfortunately, it's all going to come down to the money side of things, as each UFA and RFA stand to get some sort of raise (Ellerby may be the only exception). There's only so much to go around and with the Panthers drastically needing more offense from the forward position, it's no stretch of the imagination to think that Tallon will be wary of over-investing in his blueline when more offensive talent is so sorely needed up front. Regardless, talks are already underway with Garrison and within the next few days we'll have a clearer picture of what will happen with his situation. If the Panthers can retain them all, and still add some talent up front, they would settle into the 2012-2013 season with one of the deepest bluelines in the division and possibly in the Eastern Conference.