Last time around we met the Wanderers, one of two deceased NHL teams hailing from Montreal. This time we’ll head east and meet Quebec City’s first NHL entry, the Quebec Athletic Club or Bulldogs as they were more widely known. A poll and more after the jump... 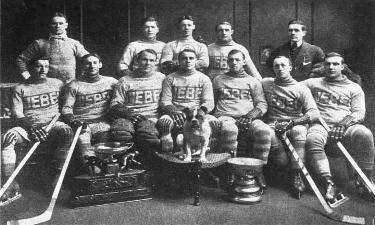 The NHL’s first team in Quebec City faced many of the small market challenges the modern day Nordiques had to deal with decades later and unfortunately suffered the exact same fate: relocation. The team was founded in 1878 as the Quebec Hockey Club, an amateur outfit that played exhibition games for a decade before joining the AHAC in 1888. Affectionately known as the Bulldogs among fans and the press, the team worked its way up to professional status in late 1909 as a founding member of the CHA after years of competing in various amateur leagues in Eastern Canada. Quebec got in the first three games of its inaugural CHA schedule before that league was quickly gobbled up by the more powerful NHA, the forerunner of the NHL. The NHA put the Bulldogs on the shelf for a year before allowing them to join the league for the 1910-11 campaign as a replacement for the defunct Cobalt Silver Kings. The Bulldogs were an on-ice flop, going 4-12 that season and finishing in last place but brighter days were soon to follow.

A complete turnaround ensued in 1911-12 as the team, led by sniper Joe Malone, finished in first place winning the NHA’s O’Brien Trophy. They were also awarded the Stanley Cup as Canada’s top team by virtue of their NHA success. They fended off a Cup challenge from the Moncton Victorias sweeping them aside 2-0 in a best of three series, winning consecutive laughers by scores of 9-3 and 8-0. The 1912-13 season saw the Bulldogs grow even more powerful than you could possibly imagine as they cruised to another NHA title and second straight Stanley Cup with a stellar 16-4 record. Joe Malone poured in an unprecedented 43 goals that season with Tommy Smith chipping in another 39. After the season, the team was challenged for Lord Stanley’s chalice by the Sydney Millionaires. The Bulldogs responded by blasting the Millionaires 20-5 in a two game - total goals matchup. A second Cup challenger, the Victoria Aristocrats of the PCHA would call on the Bulldogs later that month.

Luckily for Quebec, they decided not to put the Cup on the line and the series between the two league champions was instead deemed an exhibition. After splitting the first two games, the Aristocrats shocked the powerful Bulldogs 6-1 in the series deciding game. There would be no three-peat in 1913-14 as the team slipped to a 12-8 record and third place finish. During the following three NHA seasons the Bulldogs would play .500 hockey, compiling a 31-31-2 record including a 10-10 run in 1916- 17 which was the final season of the NHA before it suspended operations to become the NHL.

Despite being a founding member of the NHL, the team again found itself on the shelf as they lacked the funds to compete with league’s other teams and were unable to merge with a top amateur club to bolster the roster so the decision was made to suspend operations for the 1917-18 season. The Bulldogs were replaced by a "temporary" franchise awarded to the Toronto Arena Company, the direct ancestors of the Maple Leafs, to balance the schedule for the NHL’s opening season. Things remained financially sour for Quebec the next year and they were again forced to sit out again. Bulldogs star Joe Malone played for the Montreal Canadiens during these two lost seasons. Finally, in 1919, after a name change to the Quebec Athletic Club, the team, now dubbed the Athletics by the local press instead of the usual Bulldogs, made their NHL debut during the 1919-20 season. The team was once again led by "Phantom" Joe Malone who returned from Montreal to score 39 goals and win the league scoring crown. It ended up being a dismal first and only NHL campaign as Quebec finished with an overall record of 4-20, dead last in both halves of the split schedule.

There were a couple highlights provided by the explosive Malone, who scored an NHL record seven goals in a 10-6 win over Toronto on January 31, 1920 and later followed that up with a six goal effort on March 3rd in a 10-4 win over Ottawa. Despite Malone’s torrid scoring, Quebec couldn’t overcome a leaky defense and poor goaltending which resulted in the team surrendering an average of over seven goals a game for the season. Off the ice the team couldn’t overcome its financial woes, poor attendance and small market size. Before the beginning of the 1920-21 season the NHL took control of the franchise and sold it to ownership in Hamilton where it carried on as the Tigers.

The NHL would not return to Quebec City until 1979 when another blue and white clad team, the formerly-WHA Nordiques took to the ice of Le Colisée.

If the NHL ever returns to the QC, the team should be called?