Over the weekend we took a look at the Quebec Bulldogs, who despite being a charter member of the NHL, only managed to ice a team once in the league’s first three seasons. Our journey down memory lane continues as we follow the Bulldogs to Hamilton where they became the Tigers. A poll and more after the jump... 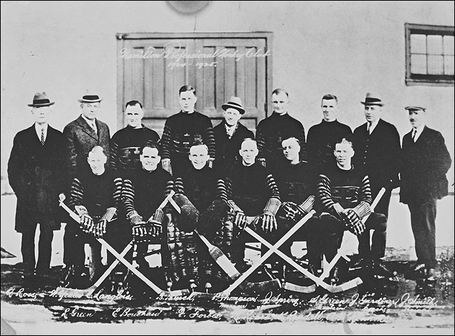 Prior to the 1920-21 season, the NHL sold the Quebec Bulldogs to the Abso-Pure Ice Company who moved the club to Hamilton, Ontario. At the time, Hamilton was the fifth largest city in Canada and the NHL felt this would be a much better home for the team than Quebec City. Another reason for the relocation was to head off a potential rival league from beating the NHL into Hamilton, which was considered a vital market. The team was christened the Tigers, which oddly enough was the name of an existing amateur club who also called Hamilton home. The NHL encouraged the three other teams in the league to supply the Tigers with players to help shore up a roster that finished last in the league the prior season. After completing a six player swap with Hamilton, the Canadiens loaned the Tigers defensemen Billy Couto .Toronto initially loaned Babe Dye, who promptly scored 2 goals in Hamilton's first game, but he was immediately recalled by the St. Patricks who sent center Billy Roach back in his place. Ottawa refused to provide any players willingly so the NHL ordered Sprague Cleghorn and Punch Broadbent to report to Hamilton but both players refused to report and their rights were later dealt to Montreal for cash.

The revamped Bulldogs made their debut as the Tigers on December 22, 1920 at home with a 5-0 win over the Montreal Canadiens . They followed up this result by splitting a two game road trip with a 3-1 loss in Ottawa and a second win over the Habs, by a 6-2 score. With a solid 2-2 record after four games the team welcomed back its star from the Quebec days, Joe Malone. They dropped a 5-1 decision to Ottawa in his first game back but returned to .500 with a 3-2 overtime win against Toronto two days later. This would be the high point of the season as a six game losing streak followed. Despite another stellar campaign from Malone, who ended up with 28 goals in 20 games, the Tigers would only come up with three more wins the rest of the way, finishing with a 6-18 record, good for another last place finish.

The losing that began back in Quebec continued to haunt the Tigers in their new locale. The 1921-22 season brought yet another last place finish as the Tigers managed only one additional win to finish with a meager 7-17 record. In his final season with the Quebec/Hamilton franchise, Malone was again a bright light, scoring 24 goals in 24 games to lead the team in scoring. Loan acquisition Billy Roach improved from 9 to 14 goals in his second season with the Tigers while goaltender Howard Lockhart cut his GAA down from a hefty 5.45 to 4.39. The Tigers opened the 1922-23 season with a 4-3 win over Ottawa. Hamilton was now led offensively by Roach and had a new starting goaltender in Jake Forbes. After ten games the team, now coached by Art Ross, produced a respectable 5-5 record but crashed back to earth by losing 13 of their final 14 games to again finish at a league worst 6-18. Despite another coaching change the Tigers opened the 1923-24 season with four straight losses. They rebounded to finish with a 9-15 record, their best ever in NHL play, but couldn't escape cellar-dweller status. The offensive efforts of new players like Billy Burch and Red Green led the way as did an impressive season from Forbes, who lowered his previous GAA of 4.49 down to a stingy 2.75.

After four straight last place finishes (five if you count the season in Quebec) the stage was set for one of the most interesting seasons in the NHL's short history. The only real constant for the Tigers was GM Percy Thompson and the roster he had painstakingly assembled was finally about to bear fruit. Jimmy Gardiner would coach this edition of the Tigers and not only would they build on the respectable finish of the prior season, they would exceed everyone's expectations. The 1924-25 season saw the NHL grow by two teams. The expansion Boston Bruins and Montreal Maroons joined, making the league a six team circuit and the regular season was expanded to 30 games. The Tigers roared out of the gate, again led by the scoring of Red Green and Billy Burch (who would win the Hart Trophy this season) with Red's brother Shorty playing a big part in the offense as well. An 8-1-1 start was interrupted by a three game losing streak but the Tigers shook that off with a seven game winning streak to sit at 15-4-1 after twenty games. The hot start allowed them to cruise home to an easy first place finish with a 19-10-1 record.

Toronto and Montreal were to meet in a playoff series with the winner facing the Tigers for the NHL crown and the right to play for the Stanley Cup but fate intervened. On the way home from their final regular season game in Montreal, the Tigers decided they should be paid an extra $200 each due to the increase in the NHL schedule from 24 to 30 games or they would not play in the playoffs. GM Percy Thompson told the players their contracts were in effect from December 1st to March 30th regardless of the number of games they played and refused to pay, triggering the first strike in NHL history. The matter was sent to League President Frank Calder who warned the players that they would be suspended if they did not suit up for the playoffs. With the Tigers continuing to sit out, the league decided that the winner of the Toronto-Montreal series would be declared league champions. Montreal won the series and faced Victoria for the Stanley Cup but eventually fell to the Cougars. This was the last time the NHL lost the Cup to a rival league.

The suspended players were each fined $200 for their antics and Hamilton's chance for Stanley Cup glory had come and gone. After Abso-Pure could not secure the funds in the off season to build a new arena, the NHL decided it was done with Hamilton. At a league meeting on September 22nd, 1925 the Hamilton franchise was officially revoked and the matter of the player fines and suspensions was quietly dropped. The rights of the Hamilton players were sold to the expansion New York Americans for $75,000. Despite icing a first year lineup that was for all intents the Hamilton Tigers, the Americans are not considered a continuation of the Quebec/Hamilton franchise. The loss of the Tigers created a wound in Hamilton which to this day has not healed. Despite some solid efforts from the city and most recently Jim Balsillie the NHL has not seen fit to return.

Will the NHL ever return to Hamilton?