For fourteen seasons this club battled the Canadiens on and off the ice for hockey supremacy in Montreal. Today we take a look back at another team that didn't quite have what it took for long term survival, the Montreal Maroons. A poll and more after the jump... 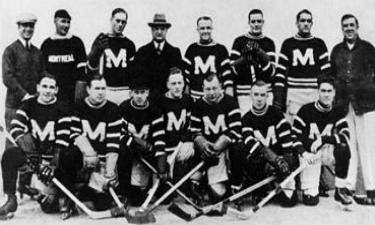 The Montreal Maroons were born in 1924, along with the Boston Bruins, as the NHL expanded to six teams. The league decided it was time again for a second team in Montreal. The new club would replace the Wanderers, who died early in the NHL's inaugural season, in the hearts of the city's Anglophone population. The established Canadiens weren't thrilled about the idea but giving them $11,000 out of the $15,000 expansion fee removed any opposition and Montreal was once again a two team outpost. After failing to acquire the rights to the Wanderers name, the team was dubbed the Maroons due to the color of their sweaters. The NHL's first large arena, the famous Montreal Forum was constructed for the Maroons but would soon house the Canadiens as well.

The Maroons opened the 1924-25 season on the road against expansion sibling Boston, dropping a 2-1 decision. After a shutout loss in their home opener against Hamilton, the Maroons picked up their first ever win, beating the Ottawa Senators 3-1 in front of a thrilled home crowd. The Punch Broadbent captained Maroons played good hockey during the first half of the season, a 4-1-1 spurt boosted their record to 8-6-2 sixteen games into the season. Unfortunately, the stellar goaltending of Clint Benedict was not enough as the Maroons offense sputtered the rest of the way, causing the team to drop 13 of their final 14 games. Despite the collapse, the Maroons managed to edge out the Bruins in the standings, finishing in 5th place with a 9-19-2 record.

For the 1925-26 season the NHL again added two new teams, the Pittsburgh Pirates and New York Americans joined the fray making the league an seven team loop with Hamilton dropping out. An already solid Maroons roster was bolstered by the arrival of rookies Nels Stewart and Babe Siebert. The dynamic duo would provide the missing offensive spark with Stewart exploding for 34 goals and Siebert chipping in 16 more. For his efforts, Stewart was awarded the Hart Trophy after the season. After an opening night loss in Ottawa, the Maroons rolled through the regular season, ending up in second place with a sparkling 20-11-5 record. The Maroons dispatched the Pirates 6-4 in a two game - total goals series to earn a trip to the NHL finals. Benedict was the star as the Maroons edge the Senators 2-1 in another two game - total goals tilt. The newly crowned NHL champs would meet the Western League's Victoria Cougars for the right to hoist Lord Stanley, with the Forum slated to host the best of five series. On the strength of six goals from Stewart and three shutouts from Benedict, the Maroons overwhelmed the Cougars, winning the series 3-1, capturing their first Stanley Cup in just their second year of existence. This was the last time a team from a rival league would play an NHL team for the Cup.

The NHL bulged to ten teams in 1926-27 by adding three new expansion teams to the mix: the New York Rangers, Detroit Cougars and Chicago Black Hawks, who were largely stocked by players from the now defunct WHL. To accommodate the new arrivals the league was split into two divisions and the schedule was increased to 44 games. Montreal opened their season on the road with a disappointing 1-0 shutout loss to the Rangers. The Maroons were uneven the rest of the way but managed to make the playoffs despite a 20-20-4 record. They faced the Canadiens, who were now sharing the Forum with them, in a two game - total goals series. After playing to a 1-1 tie in game one, game two went to overtime scoreless before the Habs tallied to win the first "Battle of Montreal" 2-1 on goals.

The 1927-28 season saw a return to form for the Maroons who used a 12-4-1 stretch run in the second half of the season to capture second place in the Canadian Division with an overall record or 24-14-6. Nels Stewart scored 27 goals, bouncing back from a 17 goal campaign in 1926-27, and Benedict posted six shutouts. They first defeated Ottawa and then exacted revenge against the Canadiens in the semifinals before falling to the Rangers in a thrilling, hard fought Stanley Cup finals three games to two.

After hammering the Rangers 9-1 to climb above .500, a six game swoon at the end of the 1928-29 season saw the Maroons tumble to last place in the Canadian Division. Stewart again broke the twenty goal mark and Benedict added 11 shutouts but it wasn't enough to prevent the club from missing the playoffs for the first time since their inaugural season.

Defenseman Dunc Munro would replace Eddie Gerard as coach of the Maroons for the 1929-30 season while continuing to man the blue line. Nels Stewart had a career year with 39 goals and 55 points to capture his second Hart Trophy. The team received additional offense from Babe Siebert and Hooley Smith while Flat Walsh got the lion's share of starts in goal. This resulted in a first place finish in the Canadian Division and an opening round bye in the playoffs. In the semifinals, the Maroons were bounced out of the playoffs by the stronger Boston Bruins 3-1 in a best of five series.

A four game losing streak to start the season and another later in the campaign hamstrung the club, leading to a 20-18-6 record and third place finish in 1930-31. Stewart, Siebert and Smith again led the way offensively while new goaltender Dave Kerr couldn't quite live up to the legacy left by Clint Benedict. The Maroons did qualify for the playoffs but were quickly eliminated by the New York Rangers in the first round.

The 1931-32 season saw the NHL drop to eight teams as the original Ottawa Senators sat out for a year and the Philadelphia Quakers (formerly the Pittsburgh Pirates) were no more. The Maroons struggled, going 19-22-7 but managed to qualify for the playoffs. Dave Trottier and Hooley Smith each posted 44 points during the season. In a first round matchup between the league's two third place teams, the Maroons slipped past Detroit by a 3-1 count in a two game - total goals series with Flat Walsh turning in some fine goaltending. The format remained the same in the semis but the Maroons were edged out 4-3 on total goals by eventual Cup winners Toronto. Nels Stewart tallied 22 goals in 38 games in his final season with the Maroons before moving on to Boston.

The 1932-33 season saw the Senators return to league play and some slight improvement for the Maroons as they ended up 22-20-6, resulting in a second place finish in the Canadian Division. Baldy Northcott, Hooley Smith and Paul Haynes were the leading scorers while Dave Kerr and Flat Walsh shared starts between the pipes. This time Detroit got the best of the Maroons in the first round of the playoffs, winning 5-2 on total goals.

With Dave Kerr as the main man in the net, the Maroons dropped back to 3rd place in the Canadian Division in 1933-34 finishing 19-18-11. The team opened the playoffs with a 2-1 total goal series win over the Rangers before bowing out to Chicago 6-2 in the semifinals. Baldy Northcott and Earl Robinson were the only Maroons to score in the playoffs, each picking up two goals.

1934-35 saw the Ottawa Senators move to St. Louis to become the Eagles while the Maroons continued their pattern of alternating between second and third place finishes in the Canadian Division. The team was now managed and coached by Tommy Gorman, who steered Chicago to the Stanley Cup the prior season. Former Senators goalie Alec Connell came out of retirement to join the Maroons and led them to a 24-19-5 record, good for second place behind the Maple Leafs. Earl Robinson spearheaded a balanced attack and Herb Cain contributed 20 goals. Connell shined in the first round of the playoffs, leading Montreal to a 1-0 total goals win over the Black Hawks, a sweet victory for Gorman. The offense awoke in the semis ousting the Rangers 5-4 on total goals. In the first all Canadian team final since the Maroons won their first Cup over Victoria, Montreal swept the Maple Leafs 3-0 in a best of five series, shutting down the fabled "Kid Line" in the process. Tommy Gorman became the only coach to win successive Stanley Cup titles with two different teams.

With the Canadian Division reduced by one team after the death of the Eagles, the Maroons opened the 1935-36 season with a 1-0 shutout win over Boston. The team claimed its second division title, finishing 22-16-10, edging out the Leafs by a mere two points. Alec Connell had retired again and was replaced in net by the duo of Bill Beveridge and Lorne Chabot. The Maroons faced the Detroit Red Wings in the semis after receiving a first round bye in the playoffs. In game one of the series, Mud Bruneteau beat Chabot in the sixth overtime, breaking a scoreless tie, giving Detroit a 1-0 lead in the series. The tilt set a record for the longest game in Stanley Cup playoff history. The Red Wings would go on to complete a three game sweep of the Maroons and win the Stanley Cup over Toronto.

The cash-strapped Maroons were forced to move captain Hooley Smith to Boston but Alec Connell returned to Montreal for the 1936-37 season to split time in goal with Beveridge. The Maroons had another good season but slipped back to second place in the Canadian Division, one point behind the rival Canadiens. Bob Gracie led the team in scoring followed by veterans Robinson, Cain and Northcott, A seven game unbeaten streak to close the season had the team looking primed for the playoff success. The Maroons knocked out the Bruins for their last ever playoff series win before falling to the Rangers two games to none in the semis.

The effects of the Great Depression were finally catching up to the Maroons who did not enjoy the fan support of the rival Canadiens and were among the most poorly attended teams in the league. By 1935 both clubs had some ownership members in common and these gentlemen were coming to the conclusion that Montreal could no longer financially support two teams. The club started the 1937-38 season amid rumors that the it would be forced to move. The Maroons did not help matters with their on ice performance. The team posted a woeful 12-30-6 record, finishing dead last in the Canadian Division. The league allowed the Maroons to suspend operations after the season. The owners tried to sell the club to interests in St. Louis but the NHL nixed the idea, as St. Louis was too far away from the other clubs and the high travel costs would be deadly given the economic realities of the time. These factors had led to the failure of the Eagles in 1935 and the NHL was not about to give St. Louis a second team, at least not yet. Eventually Len Peto took control of the dormant franchise and tried to revive it in Philadelphia. Unfortunately, Philadelphia did not have a suitable arena to house the team. The NHL gave Peto until the end of the 1946-47 season to find a solution to the arena issue but it was not to be. The Maroons were officially gone for good in 1947 and Philadelphia would have to wait until 1967 for the NHL to come to town.

Do you wish the Maroons had survived?