Today’s look back into NHL history takes us to the United States for the first time. Predating the Penguins by 42 years, the league’s first foray into the Steel City was a short one. A poll and more after the jump... 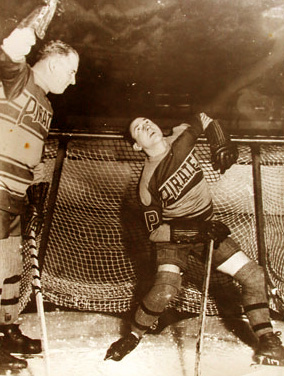 The Pittsburgh Pirates joined the NHL in a two team expansion for the 1925-26 regular season along with the New York Americans. While the Americans were stocked by players purchased from the now defunct Hamilton Tigers, the initial Pirates roster was largely comprised of players from the amateur Pittsburgh Yellow Jackets. The Yellow Jackets were owned by James Callahan who was able to upgrade Pittsburgh to major league hockey status, officially bringing the NHL to town on November 7, 1925. Instead of keeping the Yellow Jackets moniker, Callahan changed the name of the team to Pirates after receiving permission from the owner of the city's baseball team. The Pirates became the league's third U.S. based team and as with the earlier move into Hamilton, were in large part born because the NHL wished to keep a potential rival league out of a market which it considered vital. They were the first team in Pittsburgh pro sports history to don the now familiar black and gold color scheme.

The Odie Cleghorn coached Pirates opened their first season with consecutive road wins, first over second year Boston, by a 2-1 score, followed by a stunning 1-0 decision over the Montreal Canadiens in legendary goaltender Georges Vezina's final start for the Habs. On December 2, 1925 before 8,200 fans at Duquesne Gardens, the Pirates dropped their first ever home game, 2-1 in overtime to the New York Americans. After a road loss in Ottawa they returned to Pittsburgh and gave the home crowd something to cheer about with a 6-3 win over the Toronto St. Patricks followed by another besting of the Bruins. Pittsburgh overcame a six game losing streak early in the season by winning seven of their final eight games. They finished third overall in the league with a 19-16-1 record. The team was led by Roy Worters, who posted seven shutouts, defenseman Lionel Conacher who contributed nine goals from the blue line and double digit scoring from forwards Hib Milks, Duke McCurry and Harold Darragh. The Pirates qualified for the playoffs but were eliminated in a two game - total goals series 6-4 by the Montreal Maroons who went on to win the Stanley Cup.

With captain Lionel Conacher dealt to the Americans early in the season, the Pirates took a step back in the 1926-27 season, finishing 15-26-3 in the now ten-team NHL, missing the playoffs. The only thing that kept them from the basement of the American Division was the expansion Detroit Cougars. Despite the losing season, Roy Worters impressed again with four shutouts and a new addition, defenseman Johnny McKinnon, added thirteen goals.

Things would get worse in Pittsburgh before they got better in 1927-28. The Pirates opened the campaign by going a horrific 0-8-3 before finally winning 3-2 in overtime against Toronto. The club rebounded after the win, picking up steam despite a couple of minor losing streaks along way before finishing out the season with five straight wins. Roy Worters spearheaded the run by posting eleven shutouts over the course of the season. The third place finish in the American Division gave the Pirates their second and final playoff berth. Unfortunately for Pittsburgh, they once again bowed out in a two game - total goal series, this time to the Rangers. A 4-2 win in the second game was not enough to overcome a 4-0 loss in the opener.

The Pirates opened the 1928-29 season without Roy Worters who had moved on to the New York Americans where he would become the first goaltender to win the Hart Trophy. New starting goaltender Joe Miller did an admirable job, equaling the eleven shutouts Worters posted the previous season and compiling a 1.73 GAA. The problem was the offense, which was only able to muster a paltry 46 goals in 44 regular season games. The lack of firepower led to a dreadful season in Pittsburgh as the Pirates plummeted to a 9-27-8 record. Financial difficulties forced Callahan to sell the team to gangster Bill Dwyer and ex-boxer Benny Leonard, Dwyer's front man. Storm clouds were beginning to gather around the franchise.

The Pirates began the 1929-30 season with new ownership, a change from yellow to orange sweaters and new coach Frank Fredrickson taking over for Odie Cleghorn. Despite the changes, this edition of the Pirates was even worse than the prior season's nine win team. Pittsburgh finished a disastrous 5-36-3 and in last place in the American Division for the first time. The Pirates picked up the offense with five players breaking the ten goal barrier but with little help from the defense, goalie Miller proved to be flop in his second year for the team, seeing his GAA balloon to a hefty 4.08.

Losing, poor attendance and an aging arena combined with the fallout from the stock market crash of 1929 spelled the end of the Pirates in Pittsburgh. On October 18, 1930, with the team over $400,000 in debt, the NHL allowed Leonard to relocate the franchise to Philadelphia for the upcoming season where it would be known as the Quakers. Leonard's intention was to one day move the team back to Pittsburgh once a replacement for Duquesne Gardens was built but that didn't happen. The NHL would not return to the Steel City until the Great Expansion decades later.

If all it's depression era teams had survived would the NHL be more popular than it is now?