Recently we met the Pittsburgh Pirates who got off to a pretty fine start in the NHL by making the playoffs in two of the first three years of their existence. Unfortunately, things quickly soured for the team on and off the ice in Pittsburgh, so today we will follow the franchise across the state of Pennsylvania as they look for temporary refuge in the City of Brotherly Love. A poll and a brief look at the Philadelphia Quakers after the jump... 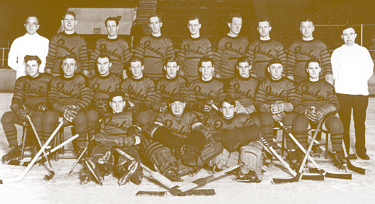 After a horrendous fifth and final season in Pittsburgh, the Pirates packed up and moved to Philadelphia where they became the Quakers. Owner Benny Leonard planned on returning the team to Pittsburgh once a new arena was built to replace the now unsuitable Duquesne Gardens but that wouldn't happen until 1961 and by that time the franchise was already six feet under. Playing out of the Philadelphia Arena, the team kept the orange and black color scheme of the final edition of the Pirates which would later be adopted by the Flyers. Former referee Cooper Smeaton would be the coach and handle a roster comprised mainly of holdovers from the club's days in Pittsburgh.

The Quakers opened their one and only NHL season on November 11, 1930 at home with a 3-0 shutout loss to the New York Rangers. The tilt drew a good crowd but only 2,000 fans showed up for the second home game a week later to watch them fall 4-3 in overtime to Ottawa. This was an ominous sign that the Quakers would be facing the exact same issues that plagued them as the Pirates. Sporting an 0-4-1 record to start the season, the team picked up their first win, at home, with a 2-1 victory over the Toronto Maple Leafs. Unfortunately, it would be six long weeks before the team was able to taste victory again, as they dropped an NHL record 15 straight games before beating the Montreal Maroons 4-3 in overtime at the Philadelphia Arena. The team only managed to win two more games the rest of the way, both against the Detroit Falcons. The 2-0 decision in Detroit, on February 17, 1931 was the only road win in Quakers history while their last ever win would come on March 12th by a 7-5 score. The final Quaker game was a 4-4 tie against the Canadiens in the Forum on March 21st, 1931. The team finished with an absolutely dreadful 4-36-4 record, good for last place in the American Division, allowing the most goals in the league. The Quakers .136 winning percentage was the worst in NHL history, a record that would stand for another 45 years until the expansion Washington Capitals came along. New starting goaltender Wilf Cude had a rough good of it in Philadelphia, posting a 4.22 GAA and winning only two games. Gerry Lowrey led the team in scoring with 27 points and longtime forward Hib Milks scored 17 goals. A young Syd Howe, who would go on to a Hall of Fame career with Detroit, was also on the roster and scored 9 goals for the Quakers.

The massive debt problems the team faced in Pittsburgh worsened in Philadelphia and with a team that was a complete disaster on the ice, ownership decided the Quakers would suspend operations and sit out the 1931-32 season. They repeated this decision five more seasons, hoping to return to Pittsburgh, until the suspension became an obituary when the franchise was officially dissolved on May 7, 1936 after it became evident that a new arena wasn't gong to be built in the Steel City anytime soon. After an attempt to revive the dormant Montreal Maroons in Philadelphia ultimately failed in 1947, the NHL would finally return to the city in 1967 with the birth of the Flyers.

When Philadelphia was granted an expansion team in 1967 should they have revived the Quakers name?