Yesterday, we took an extensive look back at the original Ottawa Senators, the greatest of the NHL's lost clubs. After a long run in Canada's capital, dwindling attendance and the effects of the Great Depression had finally taken its toll on the team. The franchise would attempt to leave it's troubles behind by heading south of the 49th parallel in search of greener pastures. We'll take a quick gander at the St. Louis Eagles after the jump… 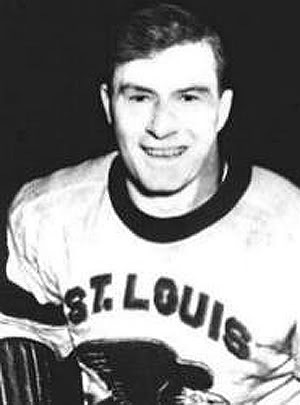 After relocating from Ottawa under a dark financial cloud, the St. Louis Eagles opened the 1934-35 NHL season in front of 12,622 fans with a 3-1 loss at home to the defending Stanley Cup champion Chicago Black Hawks on November 8th. Two nights later they would post the first victory in their new home by a 4-2 count over the New York Rangers. Unfortunately, the Eagles would drop eight games in a row before picking up a 2-0 shutout win over the New York Americans. After road losses to the Maroons and Red Wings left the team with a 2-11 record, head coach Eddie Gerard stepped down. He was replaced by another former Senator player Buck Boucher, who led the team to a 9-20-6 record the rest of the way. The Eagles finished an NHL worst 11-31-6 in their one and only campaign, scoring the fewest goals and allowing the second most in the league. During the season, St. Louis was forced to trade two players of its players, captain Syd Howe and Ralph Bowman, to Detroit for Teddy Graham and $50,000 to keep the franchise afloat. Carl Voss led the team in scoring with 31 points and Howe contributed 27 points in his 36 games with the Eagles before the trade. The final win in the brief history of the club was on March 12, 1935, at the St. Louis Arena, by a 5-2 count over the Detroit Red Wings. The last time the Eagles took the ice was a season ending road loss against the Maple Leafs in Toronto a week later.

Despite drawing relatively good crowds in St. Louis, the Eagles were hamstrung financially by occupying Ottawa's old spot in the Canadian Division, even though they were much closer to Chicago and Detroit who played in the American Division. The long, expensive road trips by train wore on the team's bottom line and affected their on ice performance as well. At the conclusion of the season, the owners of the franchise asked the NHL for permission to suspend operations for a year. The league decided to revoke the franchise instead, purchasing the players' contracts for $40,000 and then dispersing the players to the other NHL teams despite drawing some interest in a potential sale of the club from Cleveland and Ottawa. Although there was a potentially solid fan base in St. Louis, the economic climate of the times was too much of a deterrent for the NHL to succeed in the city just yet and the Eagles would die after a single season. After denying a relocation attempt by the Montreal Maroons in 1938, The NHL would return to St. Louis in 1967 with the birth of the Blues.