As Kevin dutifully counts down Panthers past and present, I figured I’d look to the past as a way of dealing with the summer hockey doldrums. During my time on LBC over the last year or so, I’ve noticed quite a few posters that may not be as well versed in the history of the game as they could be. Did you know that Montreal was home to two teams at two different points in its NHL history or that the early NHL once bulged to ten teams before settling into the so called "original six"? Today we’ll start looking at those poor teams that fell by the wayside and why. 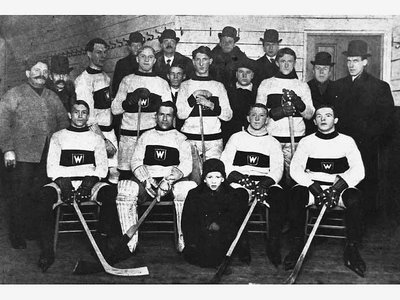 The Montreal Wanderers were formed on December 1, 1903 and began playing in 1904 as an amateur club in the Federal Amateur Hockey League. Along the way the team won the Stanley Cup three times before becoming a charter member of the professional NHA which was founded in 1909 and began play in January 1910. For those who don't know, the NHA was the direct predecessor to the NHL we know and love today. The Wanderers captured their fourth and final Stanley Cup title by virtue of finishing at the top of the standings during the NHA's inaugural season. They survived a Cup challenge after completing their regular season play from the Berlin Dutchmen of the OPHL winning 7-3, allowing them to the hold the Cup until the end of the following season when the original Ottawa Senators took it back by finishing with the NHA's best record. This was the zenith of the Wanderers franchise. With the exception of finishing in a first place tie with the Senators during the 1914-15 campaign (The Senators were awarded the Cup that season by defeating the Wanderers in a tie breaking, two game, total goals series) they struggled mightily during their remaining years in the NHA.

After going a paltry 5-15 in the final season of the NHA things would somehow get worse for the Wanderers. As a way to rid themselves of troublesome Toronto owner Eddie Livingstone, the four other owners in the NHA decided to suspend the league permanently and begin anew as the NHL for the 1917-18 season. The Wanderers got off to a winning start in the "new" league with a 10-9 decision over Toronto in front of a sparse home crowd of around 700 fans. The team would drop its next three games, getting clobbered by a combined score of 26-7 causing team owner Sam Lichtenhein to threaten withdrawing from the league unless he was allowed to bring in better players. Before a planned league meeting to deal with the Wanderers' on ice woes, disaster struck. The Montreal Arena burned down on January 2, 1918 leaving both the Wanderers and Canadiens without a home. The Canadiens moved into the Jubilee Rink and soldiered on but the Wanderers would never take to the ice again. The city of Hamilton stepped up and offered it's rink to the club but after being refused players by the other clubs, Lichtenhein decided to disband the Wanderers for good on January 4, 1918. The NHL declared the next two Wanderers games on the schedule forfeits so the team finished it's only NHL season with an official record of 1-5 despite really only playing four games. For a franchise that was once a bitter rival to the great early Ottawa Senator teams and had four outright Stanley Cup wins along with a Cup defense to its credit, this was a very sad ending.