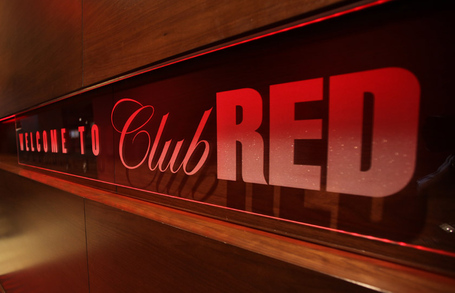 I have been thinking about Club Red and the impact that this addition to the BB&T Center has had on all aspects of the Florida Panthers, business-wise, fan-wise, and perception wise. If you don’t know what Club Red is, it is a brand new addition to the BB&T Center that encompasses three prime sections in the center and the most prominent seating for hockey. Sunrise Sports and Entertainment (SSE), the Panthers’ parent company, has followed the trend of other professional sports teams in all sports leagues to include a club of some sort in their stadiums and arenas. Club Red offers several amenities tailored to the customers with a high amount of disposable income that are not completely offered in other areas of the arena. These perks include all-you-can-eat food, valet parking, a lounge full of HDTVs, an open bar, a balcony that overlooks center ice where the patron’s seats are located and much more detailed here at the official Club Red website. One must admit that is a lot of wonderful things to have and SSE are dedicated in trying to make this section THE place to be in South Florida for entertainment and has given higher-income consumers a reason to go to the BB&T Center. Judging by the reactions of patrons that have had the privilege of sitting there it is indeed succeeding in some aspect. However Club Red is failing in others. 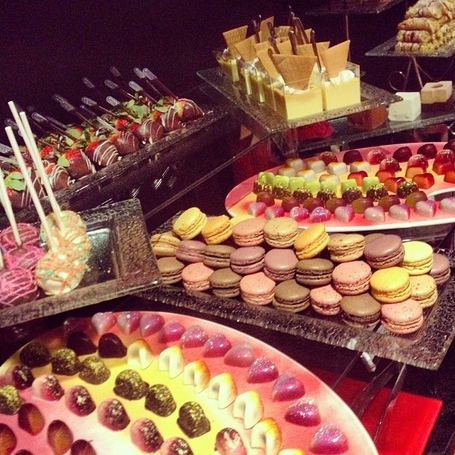 First off there is the perception that Club Red makes Florida Panthers home games look emptier than what is being reported in their attendance reports. So far through eleven home games in the lockout-shortened 2013 season, the Panthers have averaged 17,097 people in announced attendance. However despite the benefits that Club Red offers, the true attendance at the BB&T Center is well below what is announced. By true attendance I mean the amount of people that actually show up and sit in their seats. There are several issues going on. Club Red members that attend the game are mostly not watching the game from their seats but rather inside the lounge stuffing their faces with food and watching on the HDTVs. Others are corporate seat holders that have bought Club Red memberships that have chosen not to attend. The rest are unsold memberships. SSE COO and president, Michael Yormark, has stated that the organization has sold seventy percent of the Club. That means that thirty percent of the seats are empty. These circumstances have caused other people outside of South Florida to perceive that the Panthers and hockey in general is not a draw in South Florida. Why is this? Well the television camera that is primarily used in capturing the in-game action is looking right at Club Red in center ice and with how empty it is so far it is safe for others to assume that people do not like hockey in South Florida.

For some perspective here is what fans on the other side and those watching on TV are treated to. This is from a Panthers vs. Maple Leafs game on February 18, 2013 in which the announced attendance was 17,177. 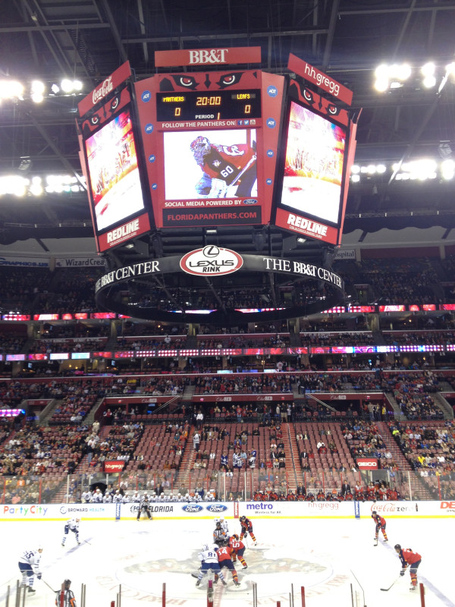 The next big, and I believe most important, thing that Club Red, and SSE in general, are failing at is harboring support and creating a culture of good with their fans. In the 2011-12 season the Florida Panthers ended a decade long playoff drought by winning their first ever division championship. Throughout that season the Florida Panthers made a number of moves that gave fans renewed hope and a sense of pride and connection in the franchise that had not been seen since the Cats left Miami Arena in the late 1990s. Dale Tallon’s blueprint briefly sped ahead by producing a winning club; the team did a rink tour around South Florida that showed that the Cats do have tons of support in Palm Beach, Broward, and Miami-Dade counties; they also returned the team’s primary color back to red as a form of reverting back to the successful formative years of the franchise. All seemed well on the fan and hockey side but yet the business side had already announced their plans for Club Red and lobbied Broward County for taxpayer money to make it happen which would eventually occur. Longtime fans had foreseen the scenario that is going on right now and most of those that had once called center ice their seats going back years and years are now found displaced and unappreciated. Some could not afford the massive hike in price for membership to Club Red which for Panthers full season tickets went from $2500 before it was installed, to the max of $16,500 now. Others could afford these tickets but refused to retain their seats purely out of principle. Bringing in new fans is a fine thing to strive for but not at the expense of those that came before especially for the Panthers fans who managed to keep the team afloat and still firmly planted in Sunrise rather than the unfortunate occurrence that caused the Atlanta Thrashers to become the Winnipeg Jets. The impact that Club Red has caused to the game atmosphere at the BB&T Center is also negative. Cheering is not as loud, the wave ends immediately at Club Red, no hats are thrown after hat tricks, and less rats land on the ice after victory. Many fans feel that Club Red is like placing a black hole in the arena. When opposing fans visit or watch on TV it is extremely embarrassing to be associated with those scores of glaring, empty, red seats. I am not sure how Panthers players and hockey operations personnel view it but it must feel pretty bad to look behind your home bench and see nothing but rows of empty red seats that say "Zimmerman Advertising" especially since in 2012 Cats fans were there showing that hockey definitely can and does work down here.

Here is a video comparison of the difference between the two sides of the BB&T Center during that same Panthers-Leafs game, the left side includes Club Red, the right is just the normal lower bowl.

So where do we go from here? According to Michael Yormark, all the remarks he is receiving about Club Red have been positive. The team holds fan forums and town hall meetings every now and then to receive insight on how to improve the BB&T Center experience but judging from the remarks of Yormark, Club Red is here to stay. But maybe there is a way to salvage it and return some semblance of respectability to the Florida Panthers perception. Currently Club Red offers three different plans, non-hockey events only, hockey only, and all hockey and events. I do not believe that Club Red will sell out for patrons who have chosen the options that include hockey. I believe the next best step is to create different membership levels. I propose three levels that could be used to offer the perks Club Red currently offers and make good with the fans that were displaced from their old seats. The highest level includes everything Club Red currently offers. The next level is a make-up plan for fans displaced by Club Red initially and for those who do not want all the Club has to offer. This second tier plan, which is a hockey only option, would not include valet parking, private concierge, or the ability to partake in the all-you-can-eat section. I believe this plan offered at a lesser price would go a long way in repairing fan support. The lowest plan is one that is currently being tried at Marlins Park. They have a club in left field that is a satellite operation of the famed Clevelander Hotel and nightclub on South Beach. Fans there have the option of purchasing a ticket to sit in left field at field level or choose to have standing room only tickets (I believe limited to 50 or 100 people) and hang out at the open bar and pool while still viewing the game. This could allow people to enjoy the perks of Club Red at the game while not taking up a center ice seat they were not going to sit in anyways thus freeing up that seat for a person who would more likely sit there. This final plan thus would allow people or organizations to enjoy the lounge, bar, balcony, food, etc. of Club Red and raise the attendance of the fans in the lower bowl.

Back when the center ice seats were last filled. 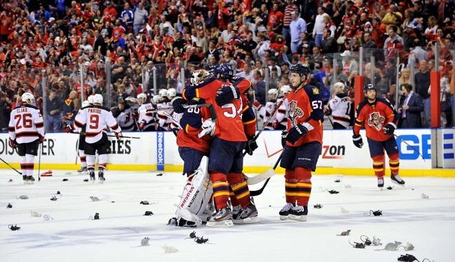 So is Club Red a bad idea? Not entirely so but its execution has been a disaster from the hockey front. However SSE has an opportunity to improve it and possibly make it better than it already is which would greatly benefit from coinciding with an improved Panthers team in the coming seasons and a possible casino expansion to the BB&T Center’s surrounding area. Some small tweaks to the options and pricing could bring more fans in, more fans in the seats and a much livelier atmosphere in the arena. If not then we could be looking at a scenario in which we may have a really good Panther team in the next several seasons and no fans literally behind them.

Can Club Red be salvaged?