Florida's division rivals to bring much more history while the road to the playoffs gets a little tougher.

With only a minimal amount of feet-dragging, the NHLPA gave it's blessing to the NHL's revamped plan for realignment on Thursday evening. All that remains now for the NHL to get it's shiny new makeover in time for the 2013-14 season is a yes vote from the Board of Governors, which should be a mere formality and happen within the next week. 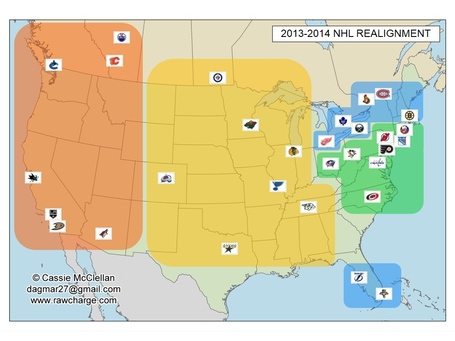 The Washington Capitals and Carolina Hurricanes will go their own way and join the Columbus Blue Jackets in moving to the Atlantic Division while the Winnipeg Jets will become a member of the Mid-West Division of the Western Conference.

After originally proposing a four-conference set up in late 2011, which was rebuffed by the NHLPA, the NHL has decided to keep the Eastern and Western Conferences around and fill them with four larger divisions instead of the current six-division format. The other major change from the original proposal is that Detroit and Columbus will now move east to split the league 16/14 in favor of the Eastern Conference. The original proposal had 16 teams in the western-based conferences.

As a member of an eight-team division, the Panthers will play 30 games against the rest of the Central Division teams (my guess is that they will play two of the teams five times and the remaining five teams four times on a rotating basis) and they will play the eight teams in the Atlantic Division three times each. They will also play all 14 Western Conference teams twice apiece (once at home and once on the road) to complete the final 28 games of the 82-game schedule matrix.

The postseason will look a little different than under the original 2011 proposal where the top four teams in each of the proposed conferences would make the playoffs. It is believed now, under the new alignment, the top three teams in each division will automatically qualify with two wildcards from each conference making it in as well. This means a division could possibly send five teams to the playoffs with the other division in that conference sending only the three automatic qualifiers. The wildcard with the lowest amount of points would play the division winner with the greater amount of points leading to possible divisional crossover. For instance, if the Panthers were to claim the second wildcard spot and the Rangers were the division winner with the most points, the Panthers would play out the playoffs in the Atlantic Division, at least that's how I am understanding things as of now.

The plan, while definitely not perfect, looks to be the best it could be for now (until expansion and/or relocation happens) when you account for things like time zones, keeping many long-time rivals together and for the most part, travel. Yes, our team is one of the teams that loses out on the travel end but look at what we are gaining. A division with four of the "original six" which should lead to better attendance and hopefully more media exposure. I think this new alignment is a huge positive for both the league and the Panthers. If you are not a fan of the plan, the league and NHLPA plan to start reviewing it after the 2014-15 season but no changes can be made until after 2016-17 according to a report on espn.com.