Last time we took a look at the Florida Panthers third jerseys through the years and the examples of highly successful third jerseys by other NHL franchises since 1995-96. Now we go with the bad. These jerseys are not bad in the sense that they are flawed designs necessarily; they are bad because they may have been overreaching or lose the identity of the team somewhere in the process.

First we have the Edmonton Oilers. The team has worn their traditional colors of orange and blue since their inception in the days of the World Hockey Association. In the late 1990s however they decided to go with a darker, more metallic looking copper and navy. When designing their third jersey they hired part-owner and comic book artist Todd McFarlane, who created Spawn. What the final product turned out to be was a cool design for a team, just not the Oilers. The jersey was navy blue with white and grey/silver stripes on the tail and arms. The shoulder logos had "OILERS" script in metal with an oil drop. The crest featured an oil drop in navy with metal surrounding it like a gear and a metallic tail like a comet. Once again it is not badly designed but the set just did not feel like the Oilers. Introduced in 2001-02 they did not make it into the Reebok Edge era.

The Calgary Flames also introduced a third jersey that design-wise was not terrible but once again featured a crest that did not look right. The jersey was black with the red and yellow stripes making a V-shape when seeing the jersey with outstretched sleeves. The jersey template was good in fact the Flames would use it as the base for new home and road jerseys. The crest was bad on the other hand. It featured a horse's head with flames shooting from its' nostrils. It tries to signify the city of Calgary’s rodeo roots but the design is just off. The black jersey would become the road jersey for the team for three seasons before being relegated again as an alternate when the NHL made the dark jerseys the home jerseys again. The design would also not carry into the Reebok Edge era.

The Boston Bruins had a gold third jersey that would last 10 seasons but somehow it seemed to be a stretch. They are known as the "teddy bear" jerseys. The Bruins stab at a new third jersey ditched the famed spoked wheel in favor of a realistic looking bear head. Not a ferocious looking bear, just a nice looking one. The striping and shoulder logo were just not good. The shoulder logo was just "BRUINS" script straight across and it clashed with the stripping which was done in a pattern that tried to resemble fur. This would look great for a kids hockey team just not a National Hockey League team comprised of grown men.

The New York Islanders came out with a jersey that was not brought down by bad logos but by bad stripe design. The crest was the traditional Islanders logo. This third featured triangular shapes jutting into the abdomen from the sides making it look very polygonal. Once again I could see this as a good design for a rec league team comprised of video game designers or geometry teachers but not for the NHL.

The best example of a bad third jersey that hits close to home for us in South Florida is what is known as either the "Happy Cat" or the "Jetblues". From a design standpoint the striping and color choice of the jersey is not bad. In some ways it reminds me of the University of Maine’s hockey jerseys. 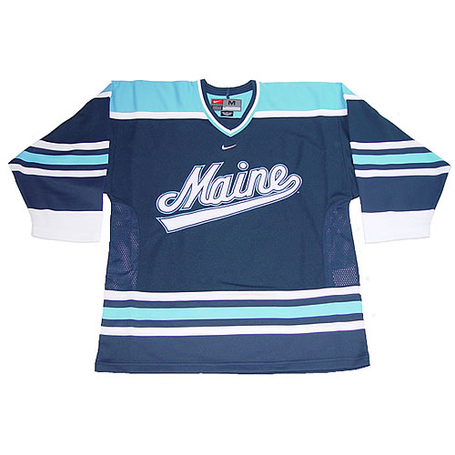 The navy blue combined with the Columbia or powder blue is a very aesthetically pleasing look. Yet the Florida Panthers just did not look right to many fans in this jersey. Some complaints were attributed to the colors not being the traditional Panthers fare with the biggest crime being the omission of red. The logos on the jersey also did not feel right. The crest of a Panther head that looks to be an update to the classic leaping cat’s head looked off. The cat just did not look fierce or intimidating. It looked like it was yawning to me personally. Then the shoulder logos scrapped the classic stick and palm tree for a pretty lazy design of a half-sun with "FLA" coming out the other half. Finally the motive behind the look turned fans off as it seemed to be sponsor based and looked awfully similar to the Pittsburgh Penguins Winter Classic jerseys from 2008 (it didn't help that the Panthers debuted this jersey against the Penguins). 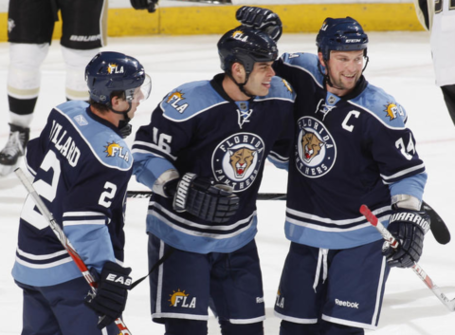 So there you have examples of the way a third jersey could be good looking in some aspects but can be ruined by either bad logos or bad stripe design. Next time we'll look at some of the most infamous jerseys in NHL history that would not have seen the light of day had it not been for the third jersey program. Get your Whoppers ready.

What was it about the "Happy Cat" jersey that you disliked the most?