First in Florida: A look back at the EHL's Jacksonville Rockets

The dog days of summer are upon us and with things all quiet on the Panthers front, let's take a look back at the first professional hockey team to make a lasting impression in the sunshine state.

Share All sharing options for: First in Florida: A look back at the EHL's Jacksonville Rockets

Unless you are somewhat of a hockey history buff, you might not know that the story of pro hockey in the state of Florida did not begin in 1992 with the tumultuous birth of the NHL's Tampa Bay Lightning, who were followed just a year later by our own Florida Panthers. Instead, the story began decades earlier, back in 1938-39 with the experimental, four-team, Miami-based, Tropical Hockey League which lasted just a single season. The first team to make a real go of it in the sunshine state were the Eastern Hockey League's Jacksonville Rockets, who began play twenty-five years later in 1964.

After beginning life out of Madison Square Garden as the Eastern Amateur Hockey League in 1933, the EHL went professional for the 1954-55 season and this version of the loop lasted until 1973, when it ceased operations and saw most of the teams that played the final season splinter off into two successor circuits, the North American Hockey League and the Southern Hockey League.

The EHL may have been a step or two down in quality from the American Hockey League but the league was a trailblazer as far as bringing hockey to untapped markets goes, especially in the American South. A few of these untraditional markets would later end up housing NHL teams.

The EHL's first foray into the deep south came in early 1956 when a fire at Carlin's Iceland forced the Baltimore Clippers to play five of their remaining twelve home games, as the "Rebels", in Charlotte, NC. The first game in Charlotte drew a overflow crowd of 10,363 (with an estimated 3,000 fans turned away) and the team was such a success during the short stint that Clippers owner Charlie Rock decided to make Charlotte the club's permanent home the following season. After sticking with the Clippers name for four seasons, the team became the Checkers and their success paved the way for EHL clubs in Greensboro, Knoxville and Nashville before the league opened up shop in the Florida outpost of Jacksonville in 1964.

The expansion Rockets, who entered the EHL along with the New York Rovers, began play during the 1964-65 season in league's Southern Division with the Checkers, Nashville Dixie Flyers, Greensboro Generals and Knoxville Knights. The Rockets were stocked with a mixture of minor-league veterans like Paul "Butch" Morris and Ron Willy as well as players just out of juniors or the NCAA like Emory Sampson. The team was coached by Scotty Moore and finished in last place with a 13-57-2 record. Bill Staub led the team in scoring with 73 points while Gordon Dibley got the most work in goal, appearing in 48 games.

Pat Egan took over the coaching reins, while also appearing in 47 games, for the 1965-66 season but the team fared no better, finishing at the bottom of the division again with a 12-57-3 record. Art Chiupka, who started the season with the Jersey Devils, led the team in scoring with 49 goals and 92 points. Chuck Goodard became the team's starting netminder after coming over from the Charlotte Checkers. The team played some of its home games at St. Petersburg's Bayfront Center arena. The games in St. Petersburg were well-received, leading the EHL to later place a team in the Tampa Bay area in 1971 called the Suncoast Suns. 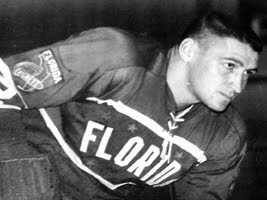 The club changed it's name to the Florida Rockets for the 1966-67 campaign as it continued to play some of its home schedule in St. Petersburg. The team planned on increasing its presence in the state by also playing some games in West Palm Beach but the idea was scuttled due to construction delays at the new Auditorium. Forward Bob Sabourin took over as the team's coach while continuing his playing career. The club began to show improvement, finishing with a 27-43-2 record but once again missed the playoffs. Cliff Pennington, who had spent some time with the Montreal Canadiens and Boston Bruins earlier in his career, led the team in scoring with 86 points. Goaltender Harrison Gray appeared in all 72 games, posting a hefty 4.36 GAA and two shutouts.

The 1967-68 season saw the Rockets gain a new rival as the Salem Rebels were added to the Southern Division. The Rockets finally made the playoffs, finishing with a 30-34-8 record, good for fourth place in the division. The club's improved play finally led to larger crowds coming out in Jacksonville. The Rockets met the first place Greensboro Generals in the first round of the playoffs but fell 3-2 in the best-of-five series. Ron Willy led the club in regular season scoring with a career-high 103 points. Willy also posted a team-high 7 points in playoffs. Harrison Gray backstopped the club, appearing in all 72 regular season games and in all 5 playoff tilts.

The 1968-69 season saw a return to the Jacksonville Rockets moniker. The Southern Division was back down to five teams as the Knoxville Knights were no more. The Rockets slipped a bit, falling to a record of 27-37-4. They did manage to beat out Salem for the division's final playoff spot by a comfortable 11-point margin. The Rockets faced the Generals for the second-straight time in the postseason and were ousted once again, this time by a 3 games to 1 margin. Ron Willy led the team in scoring for the second time in a row, finishing the campaign with 94 points. Harrison Gray saw duty in 54 regular season games while Tim Tabor was the club's goaltender during the playoffs.

The EHL expanded the schedule to 74 games during the 1969-70 season and the Rockets would hold steady as the Southern Division fourth-best team. The club finished with a 27-37-10 record which meant yet another opening round matchup with powerful Greensboro. This time, the Generals routed the Rockets in four-straight games, outscoring them by a 35-8 margin. 21-year-old Wayne Horne would led the Rockets attack with 40 goals and 90 points. Future NHL goaltender Michel Plasse would appear in 61 regular season games and start all four playoff tilts.

With Bob Sabourin concentrating on his duties as GM, Jack Bownass would take over as the Rockets coach for the 1970-71 season. The coaching change would not work out as the club plunged to an 11-58-5 record and missed the playoffs for the first time in four years. The club went through four goaltenders, including future Edmonton Oiler Ron Low, on its way to surrendering a staggering 453 goals. Billy Glasham paced the offense with 79 points on 38 goals and 41 assists.

The 1971-72 season would be the last for the Rockets who folded in December, 28 games into the campaign, with a 6-20-2 record. The club was finally done in by a lack of attendance and the rising cost of icing a pro hockey team in the early seventies.

Despite three straight playoff appearances before the disastrous 1970-71 campaign, the Rockets never truly caught on in Jacksonville, usually drawing crowds around the 2,500 mark, and remained a novelty for much of their history. Although it was a struggle, the Rockets deserve credit for lasting as long as they did considering the quality of the EHL and the challenges they faced in the Jacksonville market. While existing too far back in time to be directly responsible in anyway for the later births of the Lightning and Panthers, the Rockets did pave the way for hockey's first team on the state's west coast (the Suncoast Suns) and served notice to leagues both major and minor that Florida could and would be a viable home for hockey.

It would be great if one day the Panthers and Lightning honored the state's relatively unknown EHL heritage and faced off for a game in each city with the Cats sporting Jacksonville/Florida Rockets gear and the Bolts donning the colorful uniforms of the Suncoast Suns.