Florida Hockey History: A look back at the Suncoast Suns

In 1971, the city of St. Petersburg followed Jacksonville into the Eastern Hockey League, giving the Tampa Bay Area its first professional hockey team.

Share All sharing options for: Florida Hockey History: A look back at the Suncoast Suns

Seven years after placing the first modern pro team in Florida, the Jacksonville Rockets, the Eastern Hockey League added a second franchise to the state in 1971, the Suncoast Suns, who became the first professional hockey team to call the west coast of the sunshine state home. The owners of the franchise were originally looking at "The Triangle" area of North Carolina but were unable to find suitable accommodations. With St. Petersburg's Bayfront Center, where the Rockets had played some home games in the past, offering itself as a home, they decided to gamble on the Florida city instead. 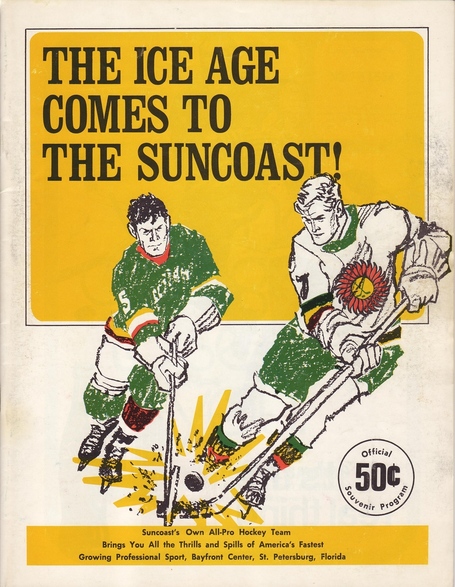 The expansion Suns began play during the 1971-72 season and were added to the EHL's Southern Division, replacing the defunct Nashville Dixie Flyers. The club was coached by Lloyd Hinchberger and veteran forward Gregg Pilling was the team's first captain. The Suns started the campaign off at home by dropping a 3-2 decision to the Greensboro Generals in front of a crowd of 2,496. Following the loss, Suncoast would take advantage of the early-season schedule which gave them four more games on home ice. This resulted in three wins over dying Jacksonville and a tie in a rematch against the Generals. After the 3-1-1 start, the team dropped eight-straight games before posting another win against the hapless Rockets. On December 7th, the Suns skated to a 4-4 tie with Greensboro in the first of four "home" games the team played in West Palm Beach that season. When Jacksonville folded after 28 games the Suns were assured of a playoff berth. To their credit, the club acquitted itself quite well for an expansion team, finishing with a 27-34-12 record.

Suncoast took on the first place Charlotte Checkers in the opening round of the playoffs. A 5-3 victory on home ice gave the Suns a 2-1 lead in the series before the Checkers roared back to win three-straight, including an overtime decision in game six, on their way to the league title. Cliff Pennington, who came over from Jacksonville after the club folded, ended the season as the Suns leading scorer with 81 points. Goalkeeper Bill Yeo appeared in 63 games and started five of the six playoff games against Charlotte. Also on the roster was defenseman Ed Kea, who would soon go on to an NHL career with the Atlanta Flames. Lloyd Hinchberger was named the Southern Division Coach of the Year for his work behind the bench while Yeo was chosen as the division's first team All-Star goalie.

The 1972-73 season saw the EHL add a twelfth team, the Cape Cod Cubs, and switch to a three division format. The league's schedule was increased to 76 games. Suncoast remained in the Southern Division with Charlotte, Greensboro and the Roanoke Valley Rebels. The Suns improved upon their inaugural campaign, finishing with a 30-37-9 record. Andre Lajeunesse led the team in scoring with 85 points while Dale Lewis, Bill Smith, Marty Desmarais and John Raynak all totaled 30-plus goals. The Suns qualified for the playoffs but were handily defeated by Roanoke Valley four games to one. Lajeunesse added 9 more points in the postseason but it was not enough to hold off the powerful Rebels.

After the season, on May 1, 1973, the four teams comprising the EHL's Southern Division decided they had had enough of their infrequently played northern-based counterparts and announced their intention to leave the EHL. After a vote was taken to dissolve the league, Roanoke Valley, Charlotte, Greensboro and Suncoast went on to form the Southern Hockey League where they were joined by two new teams, the Macon Whoopees and the Winston-Salem Polar Twins. Some of the remaining EHL teams went on to form the North American Hockey League.

The Southern Hockey League would last for three full seasons and part of a fourth until shutting down in January 1977. Unfortunately, the Suncoast Suns would not make it through the league's initial campaign. Despite bringing in new head coach Larry Kish and new affiliations with the World Hockey Association's Minnesota Fighting Saints and New England Whalers, the Suns folded on December 19, 1973, after 31 games, with a 9-22 record. At the time, Mike Randolph led the team with 18 goals while Terry Ryan was both the assists (21) and points leader (38).

The lethal combination of lack of finances and poor attendance conspired to do in the Suns. Also, the team's core fans were not happy that some of the team's more popular players from the first two seasons did not return for the initial SHL season, causing a further drop in interest. Some of the team's investors pulled out, hoping to lure the WHA's New Jersey Knights to town, leaving the remaining owners little time to sell the team to someone with deep enough pockets to sustain it. When a deadline for a $30,000 "bailout" payment was missed, the already-troubled SHL was left with no choice and the franchise was dissolved.

Florida's Gulf Coast was not quite ready to support pro hockey yet, but surprisingly enough, when the sport did return almost twenty years later, it was with the NHL's Tampa Bay Lightning.