Infographic on the guys the Cats have had between the pipes. 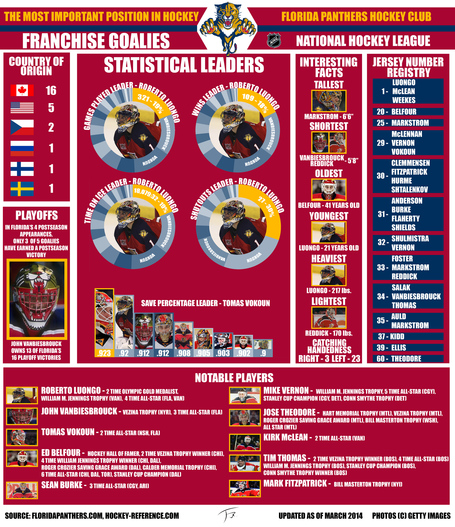 For my first official article I decided to post a project that I have been working on for my portfolio, an infographic on the various goaltenders in Panthers history. It is fairly basic but it is meant to be a brief history with some interesting facts that some fans may not be aware of. There are some things I left out:

There are four players that were listed on the Panthers official roster as goalies that probably suited up yet never got a minute of ice time, Sean Gauthier, Clint Malarchuk, Andrew Allen and Chris Mason.

Only one goalie in Panthers history has a save percentage of 1.000, Brian Foster who played in one game, got four minutes and fifty-two seconds of ice time and faced only one shot.

The save percentage leaders had to play a minimum of 58 games which is the average games played for Panthers netminders.

The "Notable Players" section are filled with only players who achieved at least one NHL official honor based on merit save for player of the week or month awards.

Obviously the season is not over yet so Roberto Luongo's numbers as well as those of Dan Ellis will change but it may not matter much for Luongo who holds almost every goaltending record in franchise history.